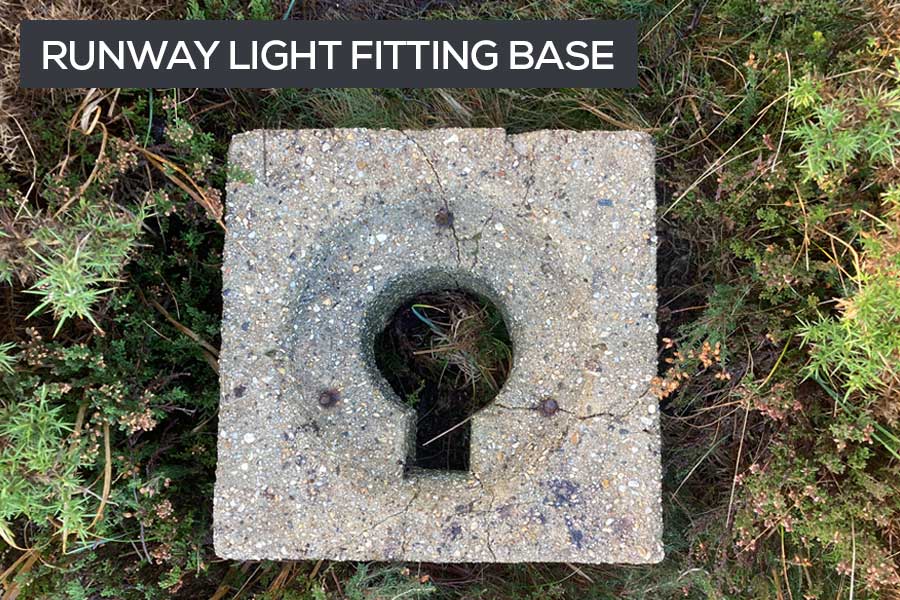 Today I found a piece of concrete on Beaulieu Heath. I gave it a quick rinse down in a nearby puddle and took a photo.

I’d not seen anything like this at RAF Beaulieu before, but it was obviously part of the wartime airfield. There’s no other reason for finding a random piece of shaped concrete like this on the heath land otherwise.

After taking the photo, I put it back where I found it, and published the image to social media for feedback on what it could be.

The first answer I received back was that it could have been a ring slide for the air defence balloons. However, local author and New Forest wartime historian, John Leete, discounted that by saying:

“Because of the concentration of airfields in the Forest it’s unlikely barrage balloons would have been used and I have found no evidence to the contrary. From Totton onwards into Southampton balloons were used to provide cover.”

I then asked in a Facebook group dedicated to wartime airfields and quickly got an answer on what this piece of concrete could be.

Base for a light used on the airfield runway

“It’s the base for a cast iron perimeter electric light. These were round (elongated on the runway). They were colour coded so the pilot knew where he was; for example on the runway, perimeter track, dispersal area, direction, exit and so on.”

These would have been embedded in to the ground around RAF Beaulieu’s runway and hardstand dispersal areas, with electric lights set into the concrete socket.

The slot that you see under the circular socket is where the electric cable cable shroud went in to the bulb holder.

Another airfield expert said the following to back up the initial response of this being a light fitting.

“This is a socket for a World War 2 Drem T1 Taxiway edge light or a C5 Runway Crossbar light fitting. Post-war T2 fittings will also bolt in place too.”

Other people then uploaded additional photos which really help to understand how this runway lamp socket would have worked.

I imagine that when RAF Beaulieu’s airfield was destroyed, all the light fitting bases like this one shown above and the one I found, plus the airfield tarmac would have been ripped up.

Most of the debris and rubble was obviously taken away, but you still see brickwork, rubble, gravel and debris scattered over the Beaulieu Heath.

And here’s what one of those light fittings that fit into the concrete socket could have looked like (below).

The runway light socket I found was not too far from one of the “frying pan” hardstand dispersal areas that branch off the old runways.

This was the first time I had ever found a piece of rubble that was intact, and manufactured to a design.

You can only imagine, but at some point in time there would have been hundreds of light fittings like this on the site.