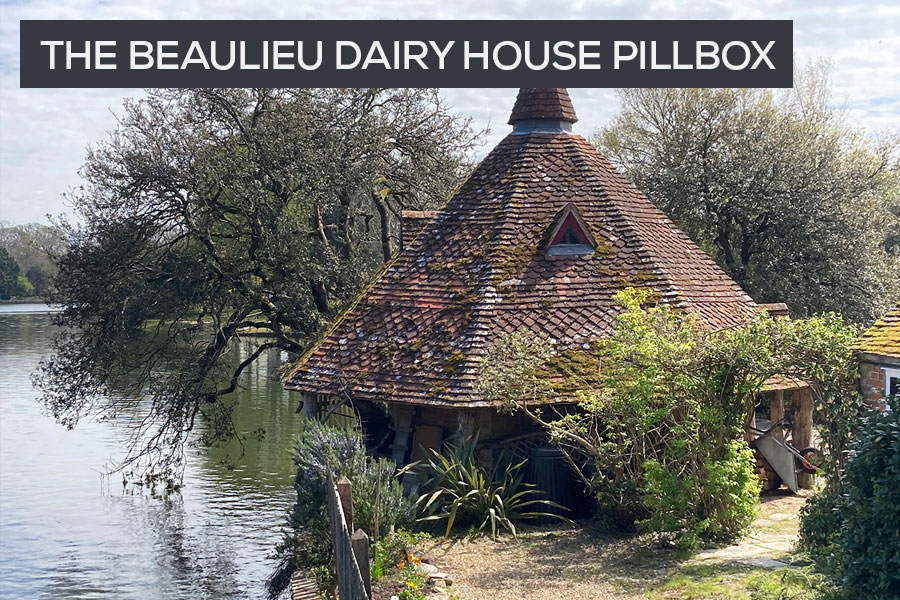 The picturesque village of Beaulieu in the New Forest had a very interesting part to play during WW2. As well as being just down the road from the RAF Beaulieu Airfield, D-Day landing craft were assembled on the river, and the secret Special Operations Executive was heavily active on the Estate.

But it also had some of the most imaginative plans to help slow down a German invasion if the enemy was to use the river as an invasion point. The plan was in the form of various secret pillboxes and shooting positions, each covering every conceivable angle of approach from the river, road, or bridge.

One of the more impressive secret pillboxes is the converted Dairy House on the grounds of the Beaulieu Mill House, set the river and bridge. I believe the Dairy House to be the best disguised pillbox in the whole of Britain – I’ve never seen anything quite like it.

In April of 2021, I was given permission by the Beaulieu Estate and Mr Phipps who lives in the Mill House, to come and look at the Dairy House pillbox to document it and share what I uncovered.

On that day I was able to take photos of both the outside and inside of the Beaulieu Dairy House, including a video tour which you can also see above.

As you travel into Beaulieu using the Palace Road approach from the Hill Top end, you will start to curve around the road towards the bridge. If you look to your left, you might have seen an old building with a round and pointy roof to it.

The building is the Beaulieu Dairy House and I believe it originally dates from the 1700s.

Each day people drive past it without giving it a second thought. In fact, locals have told me they have passed it hundreds of times and never known the secret that it holds: it was converted into a WW2 pillbox in 1940.

I have personally never seen anything like this, and don’t think there’s a pillbox like it anywhere else in Britain.

Whilst there was a concerted effort to disguise pillboxes during the Second World War, I believe this to almost be a one-off in terms of how it looks and has been camouflaged.

The reason why Beaulieu village was chosen to have a defence like this was because it was feared that the New Forest coastline could be a point of invasion. In Beaulieu village there are other hidden pillbox positions too – I will document those here in the future so please visit back.

If the enemy had landed on the New Forest beaches, the Beaulieu River and roads would have been used to travel deeper into the UK and Hampshire.

As a result, multiple positions and plans were made to defend various aspects in the village; the Beaulieu Dairy House pillbox being one of those, with the conversion happening around 1940.

The Beaulieu Dairy House is a listed building and was originally used to store milk and make butter. I believe there could be another dairy house structure like this on the Beaulieu Estate, but unlike this one, it wasn’t converted into a WW2 pillbox.

As you look at the exterior of the Beaulieu Dairy House, there are a few things of note before looking at loopholes.

Firstly, the tiles on the roof had to be replaced in 1997 due to age. The wooden struts that hold the roof up were also replaced that year, I believe due to deterioration and weakening. The struts were made from fallen oaks trees that came down in the great storm of 1987.

As you walk around the exterior of the Dairy House pillbox you will find 3 loopholes in total. Each gives a different view of a possible invasion route through the village.

The first loophole looks out over the bridge that provides an access point in and out of Beaulieu village. It’s said that this bridge would have been rigged with explosives to also help slow the enemy advance – it was also widened in 1943 to let Allied vehicles, possibly tanks drive over it.

See how the most of the window has been bricked up behind the glass. You will also see how the glass has been removed from the window to allow a clear line of fire through the slit.

The second loophole looks towards the road and walls of the Beaulieu Palace House. Incidentally, loopholes have also been cut into the walls of the Estate to also provide firing positions.

The third and final loophole overlooks the river as it flows into Beaulieu Village. As with any of the positions covered by the Dairy House’s secret pillbox, this could have been an invasion point for troops entering Hampshire.

As you can see with all three loopholes, they are very hard to see, even when you’re stood directly outside the Dairy House, they are not obvious. It’s a great disguise.

Moving inside the Dairy House pillbox, it’s clear to see how well protected it was intended to be. The door is the first sign of this, as it’s possible to see how the walls have been made a lot thicker than they were originally made to be.

As you walk through the door, you clearly see the wooden surround of the original door, before the 1940 brickwork was put in. See how the walls are now between 2 and 3 feet thick upon the conversion.

But the entrance as you see it today, has actually changed slightly from how it was when the Beaulieu Dairy House was converted into a pillbox during WW2.

The 1940 entrance would have been lower. In the 1990s, a brick section was taken out to make the entrance taller, meaning access into the Dairy House was easier. The area where you see the cement, is where the bricks have been taken out post-war.

Then inside the Dairy House, you will also notice a low ceiling. This concrete roof was also put in during the 1940 pillbox conversion for added protection.

The hole cut into the roof section was also made in the 1990s. This entrance was cut in order to allow for felting of the roof to help waterproof and protect it.

You can also see how thick the walls are by looking at the loopholes from the inside of the pillbox, and how thick the slit entrances are.

The Beaulieu Dairy House pillbox was designed to have 3 men using it, and this is noted on a defence plan of the village drawn up Lieutenant Colonel Crofton in 1942. Crofton was 2nd in command of the Home Guard’s 9th Forest Battalion.

He wrote in his notes that the plan for the Home Guard was to fight until the death to protect and slow down the enemy before reinforcements arrived.

I feel privileged to having been allowed to visit the property, and would like to offer a huge thank you to Mr Phipps for being so accommodating and welcoming to me.

I would also like to thank the following people who made my visit possible, and allowed me to research and bring you this information on what I believe to be the best disguised pillbox in Britain.

Continue Reading
link to Memories of a WAAF at RAF Beaulieu

In 1983, Robert Coles, the author of the “History of Beaulieu Airfield” book received a letter from a former WAAF who had been stationed at RAF Beaulieu during WW2. Bob’s book had been...