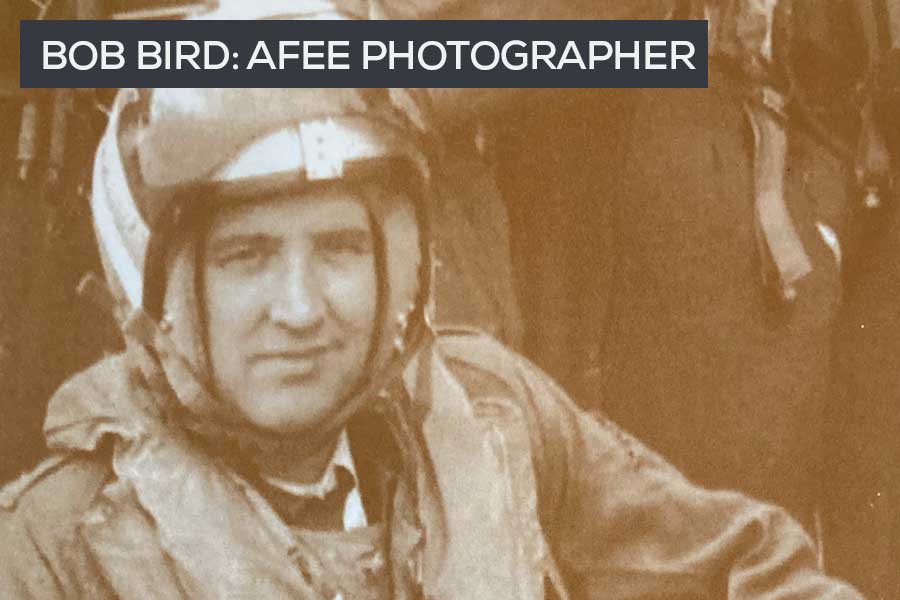 At the end of the war, Beaulieu Airfield was handed over to the Airborne Forces Experimental Establishment (AFEE). It was the AFEE’s job to research and develop non-traditional airborne applications. This included the testing of gliders, rotary wing aircraft, and dropping of personnel and equipment by parachute.

As part of the research, the AFEE had a photographic team who flew with the pilots, taking photos and documenting the tests. One of those photographers was Bob Bird.

Bob witnessed and documented some of the most amazing aircraft and tests you can imagine. This including the FA 223 Drache previously researched on this website, flying jeeps, top secret aircraft and helicopter development.

In 1999, Bob’s son Robin, discovered a box of previously unpublished photos. Some of the photos were taken at RAF Beaulieu during the AFEE’s time there from 1945 to 1950.

Those photos formed the basis of an exhibition at Beaulieu Motor Museum plus a book written by Robin Bird. The book is called “Top Secret War Bird of World War Two” and I’ve been lucky enough to recently talk with Robin about his father’s work.

I am pleased to say that Robin has given his kind permission for some of his father’s photos to be used on this website. What follows is a short selection of some of Bob Bird’s photos from the AFEE’s time at Beaulieu with some memories from Robin – for more detail on Bob’s fascinating story, please do purchase your own copy of Robin’s book.

The AFEE moved to RAF Beaulieu in January 1945 after the American bombers had left. The airfield quickly shrunk in terms of personnel from a height of 2,000 people to just 500. It was still a very busy airfield though, with various aircraft being tested, parachutes being dropped, and helicopters being flown.

As Beaulieu had been such a large WW2 airfield just weeks previously, the AFEE photographic department had plenty of room and lots of facilities to use – for example, I believe that the cinema continued to operate until February of 1946.

The AFEE converted one of the temporary brick building converted into a photographic studio as shown below. This is actually quite a rare photo of what a WW2 airfield building looked like inside as during the war, airmen were prohibited from carrying cameras – unlike the official AFEE photographers were.

Robin Bird said his father Bob had recollections of Beaulieu being an extremely friendly place with lots of interesting characters. Another member of the photographic department, Ron Whatley (read his story and see his photos), also explained how he loved the friendliness of Beaulieu Airfield too at this time.

Bob would also recount how pleasant it was to be based in the New Forest during the AFEE period.

And of course, having a team of photographers on hand meant that there were plenty of requests and opportunities for photos being made during the AFEE’s time at Beaulieu. Below is one such photo taken in the New Forest.

In the photo of the AFEE studio you might have noticed a photo of a cat on the wall. This is Pyro, and he belonged to Bob Bird and the AFEE photographic team. Pyro was named after pyrocatechol, a black and white photographic developer.

From a kitten, Pyro travelled on Bob Bird’s AFEE assignments, living at various WW2 bases and finally Beaulieu. Pyro even went on flights with Bob and the team when he was small enough to be smuggled onboard.

However, once Pyro got to Beaulieu he grown a bit too big to be smuggled in a flying jacket, so lived in Pilley just outside the airfield with Bob and his wife.

Sadly Pyro was run over by a lorry in Pilley whilst Bob was working at RAF Beaulieu, but he deserves his mention in the AFEE story at the airfield due to his distinguished wartime service from 1941 to 1945. Pyro was awarded a commendation for bravery by the People’s Dispensary for Sick Animals and is thought to be the only flying cat of World War 2.

The Flying Jeep and other amazing aircraft

One of the more imaginative and creative tests documented by Bob Bird and the AFEE photographic department was the Flying Jeep. Previously the only way to drop a jeep into battle was on a Horsa glider.

Instead, the idea with the Flying Jeep was to take an American Willys 4×4 Jeep, fit it with rotor blades, then pull it behind a plane before it was released, being able to fly down to land. In Robin’s book he has a large section dedicated to the Flying Jeep, and says:

“One can only imagine the German’s surprise at Flying Jeeps landing from the sky in Normandy and attacking them with machine guns blazing.”

Unfortunately this was never able to happen. The testing of this amazing invention was fraught with teething problems, and it never actually entered active service as it wasn’t ready by the time D-Day came around.

This meant that the Flying Jeep trials were only conducted at Beaulieu for a very short time, the project abandoned shortly after the AFEE arrived at the airfield. The tail fin and rotor blades were removed and dumped behind Nissen huts to rot away.

The AFEE kept the Jeep, minus the flying aspects, and used it to travel around Beaulieu Airfield as a workhorse vehicle.

Another aircraft test documented by Bob Bird was that of the Focke Achgelis 330 autogiro. This was a type of rotary-wing kite, known as a rotor kite. They were towed 150 metres in the air behind German U-boats during World War II to allow a lookout to see further across the sea.

The Allies had captured one, and it was then tested at RAF Beaulieu. Below you can see one of Bob’s photos, which shows the Beaulieu control and watch tower in the background.

Another captured German aircraft that ended up at Beaulieu for testing was the Focke Achgelis 223, also known as the Drache. I’ve previously documented that at length, so please read about that here.

The Drache eventually crashed on Beaulieu Airfield, never to be flown again. Bob was able to capture the image below that shows the aftermath of the crash, in which nobody was seriously injured. Bob told Robin that some of the smaller aspects of the Drache were buried, but would have rotted away by now.

Bob was also at Beaulieu when a captured German V2 rocket was examined there in 1945. This was the world’s first long-range guided ballistic missile. The V2 was powered by a liquid-propellant rocket engine and was developed as a “vengeance weapon” to attack Allied cities as retaliation for the Allied bombings against German cities.

After the war, RAF Beaulieu staged open days and a Battle of Britain victory display in 1946 during which a Spitfire crashed. Robin said that a captured German V1 rocket was also on display.

Flying as photographers with the AFEE

The AFEE photographers would have to fly in planes to take their photos of airborne tests. They would often fly in aircraft such as Dakotas, Fairey Barracudas and Fireflies – sometimes having to sit by open hatches in order to get the best shots!

The Firefly was regularly used at RAF Beaulieu, as the AFEE needed a quicker ride that could keep up with the newer aircraft being developed and tested. One of Bob Bird’s photos shows a Firefly over Beaulieu Airfield as shown below.

Bob’s photo of the Firefly over RAF Beaulieu was published in the Daily Mail many years later, where it was spotted by the New Forest airfield author and illustrator Alan Brown. Alan wrote to Robin Bird about the photo, also explaining what the white lines seen on the ground around the airfield were.

“I think it is one of the best Firefly photos I have seen. The white dots are anti-invasion lines. In 1942 the lines were several feet deep but by 1948 had silted up with weather. They do not appear on any other local airfields.”

As well as being a local author about airfields including RAF Beaulieu, Alan Brown was also in the AFEE, so had a lot of knowledge on the topic. He also drew an illustration based on Bob’s photo which you can see below.

As referenced earlier, sometimes getting the best shot meant a photographer had to lean out of a door or window. They certainly needed a head for heights, so you might expect the odd mishap to occur such as the one below.

Bob Bird’s colleague, Keith Medley recounted a story to Robin where he dropped a camera lens from a plane as he and Bob flew over a hangar area at RAF Beaulieu. He told Robin that:

“Your dad was in the plane and photographed the lens as it fell to earth. However, we could not find it on landing and I was put on a charge. A few days later a chap came into the photographic department asking if the lens he had found in a field belonged to us!”

Bob Bird and his photographer colleagues would often have to fly in Dakotas. One was used at Beaulieu to help test parachute drops, tow British gliders, and drop equipment.

The paratroopers would drop through the floor of the Dakota, eventually floating down to the drop zone which was on the site of the WW1 airfield at East Boldre.

This meant that Bob Bird had to work very closely with the parachute teams, one of which you can see in Bob’s photo below, possibly sat by a Dakota plane.

After his time at RAF Beaulieu, Bob and his wife moved to Merseyside where he opened up his own photographic booth. He also worked as a press photographer and went on to form the Medley and Bird photographic studio with Keith Medley, his AFEE colleague who dropped the camera lens over Beaulieu Airfield.

His son Robin, author of Top Secret War Bird, scattered Bob’s ashes on Beaulieu Airfield. The ashes of Bob’s widow, Thea, were also scattered at the airfield after she passed away.

Thank you to Robin for letting me share these memories and photos.