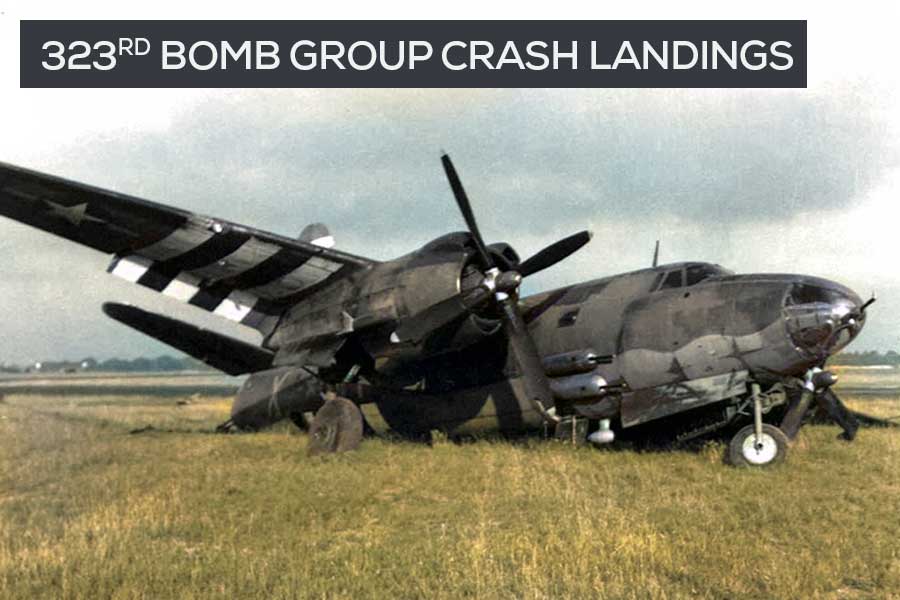 During July and August of 1944, the American 323rd Bomb Group were briefly based at RAF Beaulieu, known then as USAAF Station 408. The 323rd launched bombing missions over France to support the invasion and advance of Allied troops through Europe. They operated with a group of B-26 Marauder bombers, completing an estimated 17 missions from the airfield in the New Forest, Hampshire.

Their bombing missions were fraught with danger as the Germans were fighting tooth and nail to protect the strategic targets in France. Often the planes would have to limp back to Beaulieu in England, sometimes with a lack of fuel, damaged or missing engines, and occasionally with a degree of flak damage.

However, such was the faith that the airmen had in the B-26 Marauders, they would rather chance the flight back home to Beaulieu to perform a crash landing in their “Beautiful Ladies” than baling out.

This resource is an account of those airmen who managed to get their B-26 Marauders back to Beaulieu despite the odds being stacked against them. The four crash landings listed here involving the 323rd Bomb Group at Beaulieu Airfield, were all non-fatal, which is testament to the skills of the young men who flew the bombers.

The first recorded crash landing at Beaulieu by the 323rd Group was in late July of 1944. The Bonnie Lee, a white-tailed Martin B26 Marauder of the 456th Squadron, tail number 41-34976 WT-T, was returning from a bombing raid over Mantes-Gassicourt, France.

In Major General John Moench’s book, Marauder Men, he explains the lead-up to the crash landing in the New Forest.

“The heavy flak coming up south of Paris had knocked out one of the Marauder’s engines and the second, although still turning, was faltering badly. Momentarily, the aircrew exchanged thoughts on bailing out, but the vote went to continue to try to make it back to base – no one wanted to become a POW and they were still inside enemy lines.”

This decision to not bail out wasn’t all that uncommon with B-26 Marauder crews.

Roy Bozych, the son of an airman who flew from USAAF Station 408 at Beaulieu, and the historian for the 323rd Bomb Group, told me that given the choice of bailing or staying with her for a belly slide landing, they tended to choose the latter.

Roy Bozych went on to explain that the Marauders could really take a beating, and still get the crew home. The B-26 bomber was known for its resilience.

If the hydraulics were out, the B-26 pilot would feather the propellers and glide the plane in for a belly slide landing. This procedure was They called “bellying it in” and is what appears to have happened with the Bonnie Lee, as Moench goes on to explain in his book.

“Losing altitude all the way, 1st Lt. Robert R. Moore nursed the aircraft over the English Channel to the base at Beaulieu but, coming in now just over tree top height, he was unable to line up with the runway and attempted a go-around. With clouds of black smoke billowing out of the remaining engine, it suddenly quit, and Lt. Moore has no alternative except to take it straight in for a dead stick, belly landing in the forest ahead.”

“The awesome silence that followed was short. In seconds, the Marauder was sliding and grinding its way through the trees, the fuselage passing between two of them.”

When documenting this crash landing, Moench also managed to interview one of the crew of the Bonnie Lee, Technical Sergeant Kenneth Brown. Brown is relating this story 40 years after the crash in the following quote:

“With gasoline dripping around us, I struggled to get out of the aircraft through a hole torn in the side of the navigator’s compartment. Momentarily my backpack caught on the control cables. Finally grouped in front of the aircraft, we realized that Lt. Moore was still inside, draped over the control column, incoherently muttering about a tea party and with blood running from a serious injury.”

Within minutes a US soldier and British chaplain came over to help, an ambulance arrived, and Lt. Moore was taken to a local hospital for treatment. He survived the crash.

The official USAAF crash report that was written up on the 1st of August, just a few days after the crash landing, offers what should be considered a more accurate account of the circumstances.

You can see a section of the crash report below, followed by an abridged transcript of certain elements of report underneath that.

“B-26, number 41-34976, was involved in a crash-landing accident 6 miles WNW of AAF Station 408, at approximately 2045, 25 July 1944. The aircraft was returning from an operational mission when difficultly was encountered with the right engine due to an apparent shortage of fuel. By transferring fuel from the left engine, the right engine kept running.”

“Due to poor visibility up-sun the pilot was unable to line up properly on the runway. On the second attempt the pilot unsuccessfully executed a low approach, losing too much altitude with gear down, being forced to raise gear and go around. The aircraft was a complete wreck after crashing through several trees.”

The second recorded crash landing during the 323rd Bomb Group’s time at Beaulieu involved a Martin B-26C Marauder of the 455th Bomb Squadron, tail number 41-34953. Known as Firebird, she left USAAF Station 408 on a mission to bomb a railroad bridge at Chartres in France.

According to Moench, of the group of bombers that launched from Beaulieu Airfield that day, nine of them failed to hit the target.

Roy Bozych expands further on these types of operations, explaining that in most cases the B-26 bombers were extremely accurate in this type of mission.

“Three B-26 crews that flew over the target dropping thin strips of aluminium or nickel coins to disrupt the radar assisted flak guns they expected to encounter in the target area. A bomber formation then followed them into the target.”

“The B-26 crews were precision bombers.  To drop four 1,000 pounds gravity bombs with impact fuses onto a bridge from an aircraft moving at 250 mph from 11,000 feet, whilst flak is exploding takes a lot of skill and nerves of steel. The bombs could pass right through the spans without touching the bridge.  The bridges were only about 10 to 20 feet wide.”

Whilst Roy Bozych’s father wasn’t on the Firebird that day, Bozych Senior was a flight engineer and gunner for 6 missions with the 323rd Bomb Group that flew out of Beaulieu on French bombing raids.

“The B-26 crews developed new bombing techniques to hit the bridges. My dad said the Germans fought like hell to defend those bridges.  Everyone knew the outcome of the war depended on it.”

Back to Firebird though. She never actually made it to Chartres in France to complete the bridge bombing raid.

The Martin B-26C Marauder (tail number 41-34953) lost an engine whilst flying over England, possibly as the B-26 planes were getting into formation.

Piloted by John C Caughlan, Firebird turned back to Beaulieu Airfield and then crashed whilst attempting to land in Hampshire with no fatalities. The logbook from the time explains that the plane ran off the runway.

Firebird had completed 125 combat missions when it crash-landed on August 1, 1944. It was so badly damaged, that it was declared scrap after the crash at Beaulieu.

The third recorded 323rd Bomb Group crash landing at Beaulieu Airfield was by Wolf Pack II, coded VT-X, piloted by Frederick J Mingus of the 453rd Bomb Squadron. Wolf Pack II was a Martin B-26C Marauder, and was sent on a bombing raid to the port at St. Malo in France on August the 5th, 1944.

In the Marauder Men book by John Moench, he writes the following account of the raid and subsequent crash at Beaulieu.

“Late in the afternoon, an urgent order arrived to attack five gun barges in the St. Malo Harbor that were firing on the attacking United States ground forces. The 323rd Group launched into the growing twilight.”

“Arriving over the target in minimum light, the barges could not be identified from the bombing altitude, so the formation bombed on ‘where they were supposed to be’. Some flak was encountered, and three aircraft received battle damage.”

“On return to base, 1st Lt. Frederick J. Mingus, having taken heavy flak damage, had his landing gear malfunction and he crash landed.”

From what we know, the Wolfpack II barely made it back across the English Channel, but as we know, the USAAF airmen had a lot of trust in the B-26 Marauders so decided to stick with her.

As the Wolfpack II approached USAAF Station 408 at Beaulieu, there was black smoke billowing, and they barely cleared the trees. The engines cut out and Lt. Frederick Mingus glided her down onto the ground without the left side landing gear working.

Despite the bumpy landing, the crew all survived without injury, and the Wolfpack II was able repaired and able to fly again on new missions.

The last recorded crash landing in the 323rd Bomb Group records for Beaulieu was by Kactus Kid. This was a Martin B-26B Marauder, tail number 41-31944 from the 456th Squadron, piloted by John E Compton.

Unfortunately, there is currently no available copy of the accident record, so I can’t say for certain how the bomber was damaged. Similarly, there is no record of a bombing mission on the 23rd of August 1944 either, so I am unsure what the flight details would have been.

However, we do know that the Kactus Kid crashed at Beaulieu Airfield on that date and was declared as scrap after completing 101 combat missions.

In the photo below, you can see the Kactus Kid after she had flown 58 missions, if the bomb symbols are accurate.

There was one fatal incident involving the 323rd Bomb Group on Beaulieu Airfield. Lt. Robert C. Steinhaus died due to an fire accident in the cockpit whilst preparing for a mission on the 6th of August, 1944.

I would like to extend a huge thank you to Roy Bozych and Jan Foster. Without their help, I would not have been able to bring these accounts and stories to life. Here’s the full list of people and resources who contributed to this resource.