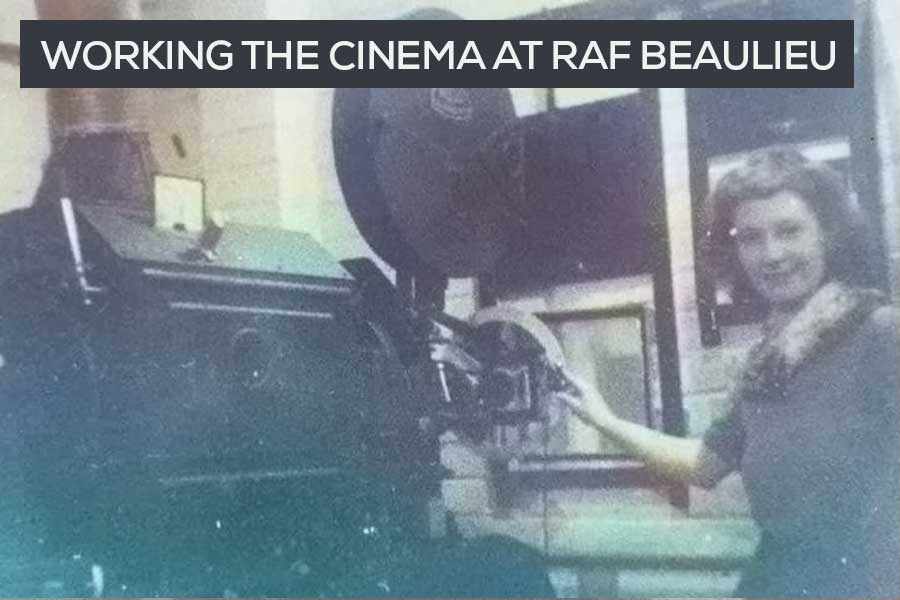 Angela Wyatt was a cinema operator working at RAF Beaulieu from the winter of 1943 until February of 1946. She worked for ENSA, the Entertainments National Service Association. This was an organisation set up in 1939 to provide entertainment for British armed forces during World War 2.

It was common for airfields of Beaulieu’s type to have gyms that would double-up as cinemas to show films and stage shows. RAF Beaulieu’s cinema was building type 16428/40 and you can see a photo lower down the page of what it looked like inside. This was where Angela worked during wartime alongside her manager.

In 1987, Angela wrote to Robert Coles, the author of the “History of Beaulieu Airfield” book. Bob’s book had been published in 1982 and was the first time anybody had written a book on subject matter.

From what I understand, Angela was in conversation with Robert Coles, as her memories and photos supplied were to help him research and publish new information on the airfield. It’s probable that the details here would have been included in a future book. Unfortunately Robert has passed away, and this never happened.

However, today I am able to reproduce Angela’s memories and photos with kind permission of Tony Johnson, a guardian of some of Robert Cole’s work and documentation. In the correspondence, Angela describes her time on the airfield, memories, and details on how a WW2 airfield cinema would work.

Below you can see photos of Angela Wyatt working as an ENSA cinema operator on RAF Beaulieu.

Many thanks for lending me your last precious copy of the History of Beaulieu Airfield. I found it fascinating. I had no idea Beaulieu had such a long history, thinking it was just a temporary airfield that came and went with World War II. You must have done an enormous amount of research!

As a civilian I didn’t know much of what was going on on the airfield itself; we were all well-drilled in “careless talks cost lives” so the Forces didn’t talk shop with civilians and civilians asked no questions.

I was on Beaulieu Airfield for roughly two years, from the winter of 1943/44 to February 1946 as an ENSA cinema operator.

Beaulieu was my first experience of living in a Nissen hut with its red-hot stove in the centre and its freezing periphery. Sleeping on an air force bed with its mattress of ‘biscuits’ (three squares laid in line) which Air Force personnel had daily to pile neatly at the ends of their beds with blankets and sheets folded on top. Being civilian, I quietly resisted the hints of the WAAF sergeant with whom I shared the hut that I should do the same.

There were two ENSA staff to the cinema, a Manager/Chief Operator, Mr Pearce, and myself. Air Force personnel could earn a little extra selling tickets at the door. Mr Pearce was a charming elderly gentleman who cycled in daily from Lymington.

The cinema was a large hangar-like building with double-door exits down the sides. In the morning I threw open these to air the place (no stigma to smoking in those days) and put forms across them to keep out ponies and cattle while I brushed the place out.

The cinema equipment was full-size 35mm commercial so needed two people in the projection box. We had a change or program twice weekly and were open six nights a week. The programme consisted of a main film, a short and the news and trailers. We had a ‘non-sync’ (gramophone) to play the audience in. The batch of records (apart from “God Save The King”) was regularly renewed by ENSA.

While one operator looked after the running machine, the other carried the heavy used spool down the iron ladder to the rewind room either to rewind it by hand for the next show, running it through thumb and finger to check for possible breaks to mend (some of the films were well-worn and cut about with joins coming undone); or to break it up into its constituent reels for sending back, winding it on a plate. Then the new spool was taken up the ladder to lace on the vacant machine ready for the switch over.

Not long after I arrived I got jaundice. Feeling unwell, cold and unable to stomach food I asked the WAAF on duty if I could see the doctor. “Oh no, you’re a civilian,” she said smugly. So I got on my bike and went to the medical quarters where the Czech doctor said “How long have you been that funny yellow colour?” and I looked down and found I was. I was carted off to Lymington hospital in a RAF van, discharged after a week and caught a train (standing room only) back to my home in Kent via London to convalesce.

When the Americans took over the airfield, I always remember the astonishing contrast between looking across at lunchtime to the road to the messes and seeing a swarm of little figures in Air Force blue cycling along it; and then looking across to see an endless procession of jeeps, command cars and trucks, crammed with khaki-clad GIs sprawling all over and out of their transport.

Some of the GIs did require RAF cycles which they were inclined to ride with their knees outside the handlebars as through riding a child’s cycle.

As the RAF got posted away, they moved the remaining WAAF and me to Holmsley South airfield, bussing us in each day. As I worked late, I had to have an individual jeep to take me over. After the sergeant in charge of the motor pool found there were no ‘extras’ to driving me over, he rather lost interest and sometimes forget to send transport, so I dossed down with a blanket between the projectors.

Shortly after the Americans took over, Mr Pearce retired from the role. The US Entertainments Officer has some bright ideas on what he could do with the cinema (he didn’t do anything, but we didn’t understand American hype in those days).

Finding myself alone, luckily, I saw in the cinema queue one of the motor pool drivers, Jimmy Hackett, a truck driver from Seattle, so I dragged him in as my instant assistant operator. Every time my assistant was posted elsewhere I found another serviceman to help me.

Another contrast between the RAF and USAAF was in the messing. Instead of the Sergeants’ Mess complete with civilian plates and cutlery, you were issued with a “mess kit”, American version, which consisted of a tin with a handle, a matching tin with a groove down the middle, and a knife, fork and spoon, all of which threaded on to the handle for carrying.

You stood in line with your two tins, the handle of one fitting the groove of the other so that you needed only one hand, and the chaps serving, sloshed in the food which was quite amazing and beyond the RAF’s dreams – though I do remember one English man (it must have been Thanksgiving) saying disgustedly “Jam on turkey!” and throwing the whole lot away.

The waste, for war time, was enormous; after you’d eaten you threaded your equipment on the handle and based surplus food into the overflowing bin outside.

Then there was the PX, overflowing with goodies; and the American Red Cross girls serving coffee and American doughnuts (no jam, ring-shaped), There were also unlimited fat American cigarettes.

That was a hot summer and one very hot day my assistant operator and I joined a group of GIs swimming in the river just beyond the camp. I rolled up the arms and legs of my butcher blue boiler suit working uniform. The next day, the tannoy announced the river was out of bounds.

I had afternoons off, unlike everyone else. Sometimes I sat and watched the Red Cross girls rolling out the dough to make doughnuts (and sampling them); sometimes I cycled down to Hatchet Pond and sat on the ruined Abbey wall or had tea in the nearby tearooms.

I often went home for my day off (Sunday), cycling down to Brockenhurst on Saturday and catching the midnight train. I remember just before D-Day the road was alive with transport.

It was much safer on camp than at home what with doodle bugs and so on. I saw one spectacular raid on Southampton not long before D-Day; I sat on a forest bank and watched the distant fireworks.

After our units left for France, there was only a holding party left on the airfield for the winter. The cinema carried on as usual.

When the AFEE took over it was fun to look towards the runways when you heard a low-flying plane and see perhaps a jeep drop out and parachutes open.

I recall being told that Jimmy Driscoll had made a bet about a low jump (I think it was) and broke his ankle. Also, that a new type of plane had been delivered and some pilots examined it curiously. One said, “What’s this?” and pulled a lever to see and it was the wrong one to pull – the undercarriage came up.

Both these stories are hearsay, and the latter sounds a bit apocryphal to me so better be checked.

VJ-Day was a national holiday, but Beaulieu jumped the gun and sent everyone on leave the day before. I was sitting with the Duty Officer (Flt.Lt. Jimmy Taylor, AFC) when someone official rang up and was very surprised to find we’d won the war before anyone else.

In February 1946, I resigned, turned in my RAF cycle and left the New Forest.

No, the heath wasn’t all that bleak. In those days few people had central heating, so we dressed for the climate; and in the summer it was very pleasant. After all, where we had our living quarters is now a caravan camp for holidaymakers.

There is still one hut on the site – I think it was one of the messes. Even the RAF food was better than civilian rations, and there was always the NAAFI canteen with unlimited tea and ‘wads’. There was very little traffic compared with today so cycle rides through the forest were enjoyable. Perhaps it was bleak on the actual airfield, but I was never there.

Editor’s Note: If you are a family member and you would like to get in touch, please do via the contact page. I will be able to put you in touch with Tony who holds the correspondence, and make any adjustments to this content if requested.