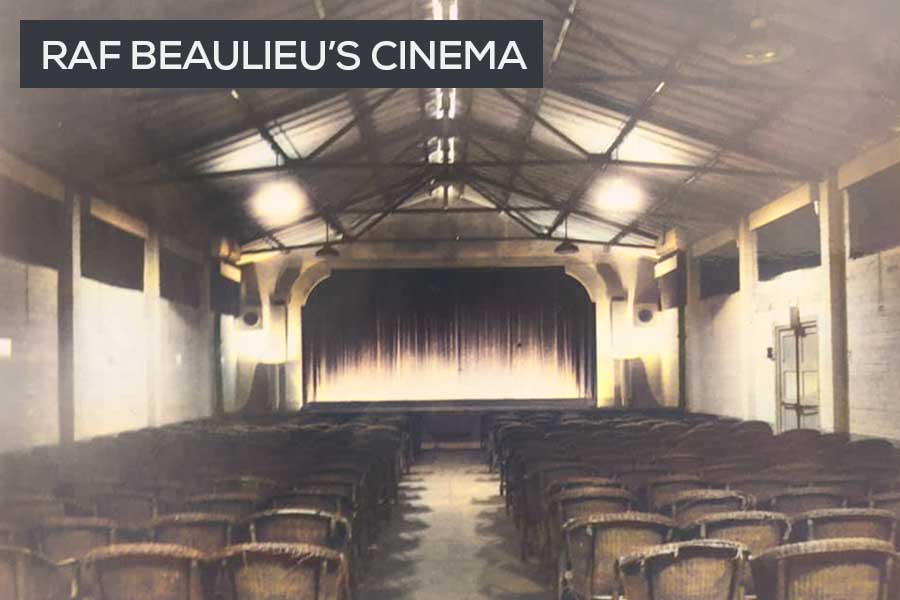 During wartime, airfields the size and specification of RAF Beaulieu had a cinema to help entertain the personnel on site. Films as well as shows could be shown there, as a stage could also be set-up in the building.

In RAF Beaulieu’s case, I believe the cinema is located on the 1945 plan as being building number 138. Whilst on the 1945 key it’s listed as a gymnasium, I believe it was primarily used as a cinema and theatre. This is based on accounts from those who served on the airfield.

I will explain why I have reached this conclusion on RAF Beaulieu’s cinema lower down the page, but firstly I want to explain the architecture and layout of the building.

As with all WW2 airfield architecture, all buildings were built to existing Air Ministry templates. In a cinema’s case, it was building number 16428/40, a plan shared with the gymnasiums on WW2 airfields.

The reason gyms and cinema had the same building type number 16428/40 was because it was a structure designed to be multi-purpose.

The base aspect of the building was designed to be gymnasium, but airfields could also add two extensions onto it to convert it to a cinema and church. Here’s how those building type numbers from the Air Ministry plans would work:

Adding the two extensions on meant a gym design was then able to be used as a truly multipurpose structure for the airfield’s personnel. Given that Beaulieu Airfield sometimes had in excess of 2,000 people on site, having a cinema and stage to offer entertainment, plus a church room for the those with a religious inclination, would have been essential for morale.

Paul Francis of the Airfield Research Group as re-created layout drawings of how the base cinema layout of 16428/40 would work with the extensions for a projector room and church attached.

You can see that drawing below.

The main part of the building was intended to be a gym, although I do have my doubts as to whether it was used for this purpose at Beaulieu.

Regardless, the main aspect to the construction would have the main large room, with two storage rooms, two dressing rooms, and toilets.

Projector room extension converting it into a cinema (8891/42)

By adding the rear extension which included a generator and switch room, a projector room, and rewinding room, the structure was now building type 8891/42 and could be used as a cinema as well as a gym.

With that extension placed on the rear, the main building could then have room for 373 seats, making it the perfect cinema or theatre.

It was also possible to add a further extension to the front of the cinema and gym which would serve as a church. This was a long and skinny extension which then meant the building was type number 15424/41.

Currently I don’t any anecdotal evidence or stories about the church being used at Beaulieu.

RAF Beaulieu’s cinema: what we know

I am not convinced that the cinema building was used as a gym. My research leads me to believe it was used exclusively as a cinema and building for performance shows.

Whilst I cannot confirm this, I say it for a number of reasons.

Firstly, if we look at historical imagery, we see that it was built from the start to be the building with both the church and projector room extension on. In the images below I include an aerial photo from April 1943 which appears to show it under construction with both extensions in place.

That image is also split with a more recent aerial image that clearly shows an imprint of where the building once stood on what we now call Roundhill Campsite.

Secondly, I am in possession of a letter written by Angela Wyatt who worked as the cinema operator at Beaulieu Airfield from 1943 to 1946. The airfield was constructed in 1943, and in Angela’s letter she writes the following:

“The cinema was a large hangar-like building with double-door exits down the sides. In the morning I threw open these to air the place (no stigma to smoking in those days) and put forms across them to keep out ponies and cattle while I brushed the place out.”

If the building had been used as a gym too, this seems like a strange thing to say. I can’t imagine the doors would have been blocked and left open like that if airmen were using it as a gym. I would expect her to mention it was a functioning gym during the day.

In one of Angela Wyatt’s photos above, you see the inside of the cinema with all of the chairs laid out. I find it hard to believe that all those chairs would be constantly being moved out during the day whilst gym equipment was then placed inside instead.

It sounds like Angela Wyatt would be preparing the building during the day for the films and shows later that evening. But, this is purely conjecture on my part. You can read Angela’s letter in full where she describes her time operating the cinema at Beaulieu, with no mention of it ever being used as a gym.

How the cinema operated during WW2

According to Angela Wyatt’s letter, the RAF Beaulieu cinema was operated by a civilian workforce, employed by ENSA, the Entertainments National Service Association (read more on Wikipedia).

The staff consisted of:

The cinema on Beaulieu Airfield was operating almost daily. Angela Wyatt explained that it:

What’s also interesting from a functionality perspective is how she describes the extension to the rear which enable the building to operate as a cinema:

“The cinema equipment was full-size 35mm commercial so needed two people in the projection box. We had a change or program twice weekly and were open six nights a week. The programme consisted of a main film, a short and the news and trailers. We had a ‘non-sync’ (gramophone) to play the audience in. The batch of records (apart from “God Save The King”) was regularly renewed by ENSA.”

“While one operator looked after the running machine, the other carried the heavy used spool down the iron ladder to the rewind room either to rewind it by hand for the next show, running it through thumb and finger to check for possible breaks to mend (some of the films were well-worn and cut about with joins coming undone); or to break it up into its constituent reels for sending back, winding it on a plate. Then the new spool was taken up the ladder to lace on the vacant machine ready for the switch over.”

How the cinema location appears to have changed post-war

Furthermore, there are illustrations by Alan Brown showing the cinema and its location. Alan Brown served at Beaulieu in the immediate post-war period as a parachute instructor with the Airborne Forces Experimental Establishment (AFEE).

He wrote a number of books about his time at Beaulieu, including Tales from the Crew Room. Below is one example where he illustrates the cinema position on the airfield.

This location shows the cinema in the exact position where I have placed it in my research after examining the evidence.

However, when you read Alan Brown’s accounts it does throw some elements of confusion into the mix. For example, he says the following in his memoirs:

“There had been a gym/cinema building at Beaulieu during the war years, but by 1945 it was just used as a cinema with two shows of third-rate old films a week. These became far more entertaining by the wry comments of wits in the audience. The gym was now housed in a much smaller hut.”

He clearly states here that the building was used as a gym and a cinema. I wonder if he was mistaken here though, as he didn’t serve on the airfield during the war, but from 1946 onwards.

It might be that he understood the building type was used as a gym on WW2 airfields, so assumed it had been used as this at Beaulieu before he arrived.

He then also says in his memoirs that the airfield cinema was closed after 1947 but was still used for some RAF films. This would correlate with Angela Wyatt’s letter where she says she left Beaulieu in 1946, so it might be that the cinema continued to operate for a short period.

The closure of the cinema almost certainly occurred. In 2021, a local gentleman by the name of Trevor Phillips recounted this story to me:

This would make sense, as post-war once the AFEE moved onto RAF Beaulieu, the number of personnel there reduced from around 2,000 to 500 – a large cinema would not have been necessary with this reduction in size.

Based on that, I can say with good certainty, that the main cinema building did close. Films continued to be showed at Beaulieu – but in a different smaller building which had been re-purposed.

I don’t yet know which smaller building the new cinema was located in during this post-war period, but it appears this new smaller one then shut in 1949. According to Alan Brown’s memoirs again:

“There were some local cinemas in Lymington and Lyndhurst and up to 1949 there was a camp cinema with three changes of film each week. If the film was rather corny it would be punctuated by humorous comments from the camp audience which often more than made up for a poor film.”

I assume Alan Brown is talking about the new cinema here, as in previous memoirs he appears to say that the main cinema building had closed in 1947.

How the cinema building would have looked

There are still examples of this building type on WW2 airfields throughout the UK, in various states of decay. Richard Flagg, who documents airfields has kindly provided the image below which shows how Beaulieu Airfield’s cinema would look if it still stood today.

The existing example above in Northamptonshire clearly shows the construction of the WW2 airfield’s cinema and gym building with the cinema and church extensions. Paul Francis from the Airfield Research Group says: