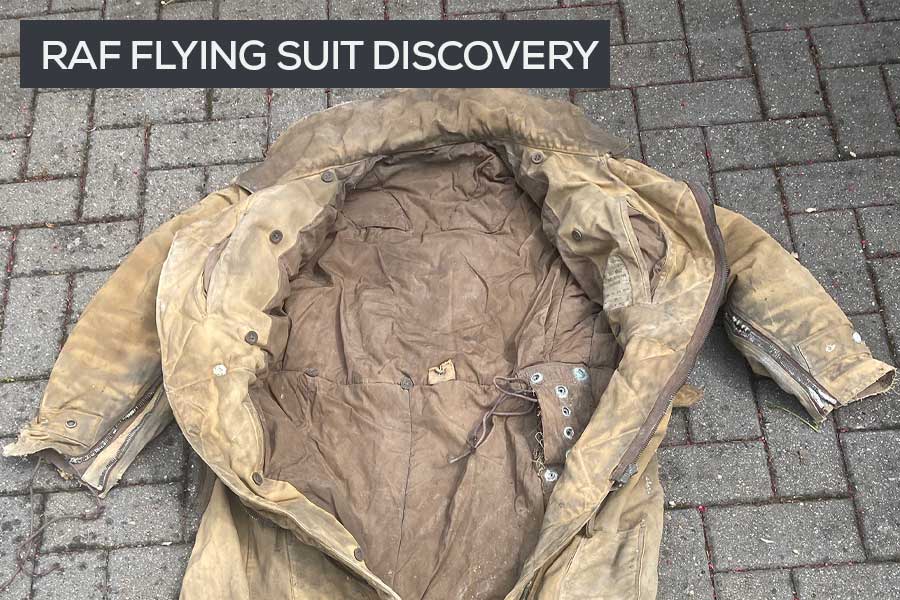 In 2021, a homeowner in East Boldre, next to Beaulieu Airfield, found an interesting item of clothing in their loft from the WW2 period. It appeared to be a RAF flying suit and it was being used as loft insulation, hence being found in the roof of the house.

How long the flying suit had been in the roof is anybody’s guess, but it was damp and very degraded in parts.

Laying the jacket / suit out today, you can see evidence of what appears to be wiring inside, suggested it was heated, plus a label with serial numbers on. This has helped me to understand the exact suit type it was and how it might have been used.

The label has the serial number AM 22C/739. A quick Google search shows that this means this suit is a WW2 air gunner flight suit, also known as a Baxter, Woodhouse & Taylor designed buoyant flying suit. They were manufactured in July 1942 for RAF air gunners who were unable to wear bulky lifejackets in confined spaces such as gun turrets.

But who did it belong to, and is it even related to RAF Beaulieu’s war years?

I wanted to find out, so canvassed opinion online and had various people come back with some interesting scenarios.

Theory 1: Belonged to an airman at Beaulieu

The most romantic of notions would be that the flying suit belonged to a RAF or Czech airman who flew from RAF Beaulieu. Given the close location to the airfield, it’s certainly a possibility.

It might be that the airman gave it to a local person and it ended up in the loft. One consideration was that the airman might have lived in East Boldre village. I was told that that a man called Ken Halstead was a tail gunner who lived in Masseys Lane, East Boldre. It’s said he could have flown in Halifax bombers.

However, most of the airmen flying from Beaulieu were stationed in the Nissen or Handcraft Huts based on what we know call Roundhill Campsite.

Theory 2: Was used by local families as bedding

The second possibility was that the flying suit ended up in the house where it was used by a family for bedding. The two following statement was given by gentleman whose family lived locally, at Stockley Cottage.

“Lots of the people who lived in and around the airfield from east boldre to furze and west to Dilton were only too glad to make use of anything free from the base or the small air strip at South Baddesley. My father was one of those who slept under ex RAF coats.”

Another man explained how his family saw American airmen getting rid of clothes, so perhaps the RAF did similar with clothing no longer wanted?

“My grandad in the RAF was based at Beaulieu in WW2 as the Yanks were pulling out , he witnessed mountains of stores being junked , piles of flight clothing put on the fire. He also got a flight helmet and shirt from the pile , he was ground maintenance.”

Based on these accounts, it’s possible the RAF flying suit was thrown out and then re-used by locals during the war, when supplies were hard to come by.

Theory 3: Was bought post-war by a motorcyclist

The final theory, and one that holds a lot of weight, is that it was military surplus, then possibly purchased by a motorcyclist. As you can see from the post-war advert below, the government were selling RAF flying suits to the general public.

As further confirmation, I was told this on a social media comment:

“People forget it that most of this stuff was sold up post war, by the looks of thing the internal straps have been cut out, the likes of sidcot flying suits were popular for uses such as motorcycling etc.”

We will probably never know who the RAF flying suit belonged to, and whether it did actually see active service from Beaulieu Airfield or not.

However, given it was found so close to RAF Beaulieu, it adds to the story of the wartime and post-war years here, offering more fascinating insight into people’s lives.