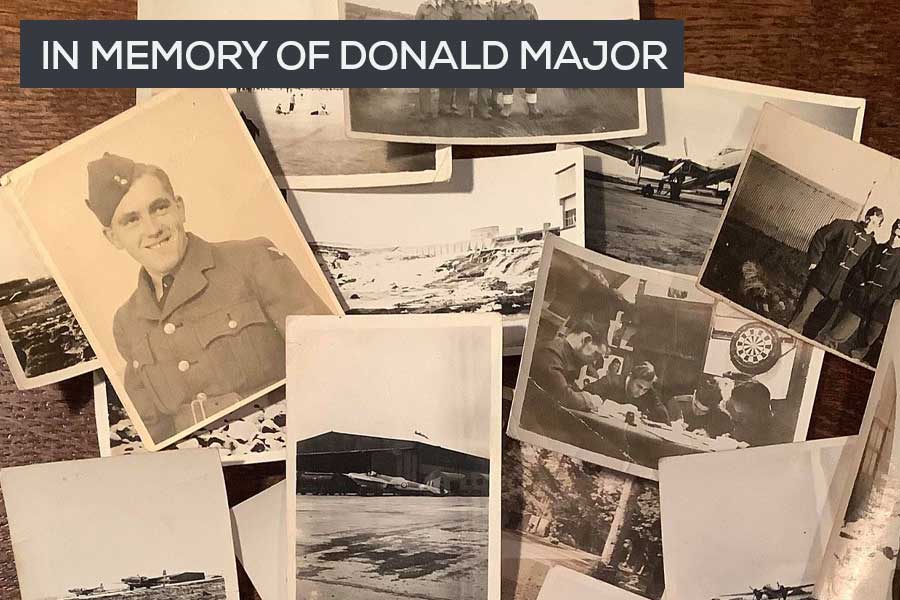 Many British airfields in WW2 were huge operations. Beaulieu is a perfect case in point, as during the wartime period it could have more than 2,000 people working there at any one time. In effect, it had to operate as a small town.

Given the size and importance of the airfield, it required around the clock maintenance and upkeep, with the people who held those roles just as critical as anyone else.

One such person was Donald Arthur William Major. Born in April 1926, Donald was just 18 years old when he arrived at Beaulieu to work as a ground worker and maintenance man.

His arrival point was during the period when Beaulieu Airfield was under American control, known as USAAF Station 408. He would have witnessed the P-47 “Hell Hawks” fighter planes during one of the busiest periods in the airfield’s history.

Donald’s grandson, Chris Collins has been kind enough to share some of the memories his grandfather recounted to him before passing away in 2011. Here’s what Chris recently told me, with some photos kindly donated from Donald’s photo albums.

As a young man, my grandfather started out as a fire watcher with the ATC during the early war and blitz. He was caught with a couple of incendiary bombs in the shed. His dad and a local policeman gave him a clip round the ear.

He also recalled seeing a Heinkel 111 coming in low and fast in 1941. He was “gawking” at it outside before a big burly Bristol copper grabbed him and said, “get inside the bloody shelter”!

It machined gunned the high street before eventually being hit by a shell from a Heavy Anti-Aircraft gun site. It then collided with a barrage balloon cable which almost ripped its wing off. Only one of the crew survived.

From 1944, he was based at Beaulieu in WW2 and put on ground works for the RAF. He had failed the gunnery test, so instead was maintenance. This meant he would work on things like airfield repairs, buildings, filling holes, that sort of things. General building and repair really.

He told me that he arrived at Beaulieu just before the Yanks pulled out so that could be somewhere around June of 1944 as he also told me about P-47s. He used to call the American pilots “them buggers with swanky silk shirts”.

He told me how he witnessed mountains of stores being junked, piles of flight clothing put on fires. The were just burning a big pile of uniforms before they left the airfield to move to France.

Not to let anything go to waste, my grandad helped himself to a flight helmet and shirt from the pile. He used the leather flight helmet after the war to keep his head warm as he worked as a labourer on the roads.

Another story he told me was quite a hairy moment. He said that not long after arriving at Beaulieu him and a gang were working at one end of the runway, when a P-47 came limping back into land, with a bomb hanging from its wing.

As the US P-47 Thunderbolt landed, the bomb fell off and skidded right down the runway at them! They crapped themselves… who wouldn’t! They had to dive into a pile of dirt that they were using to fill a hole with.

Thankfully the bomb didn’t go off, it was a dud.

After his time at Beaulieu, he moved to RAF Reykjavik in Iceland. He there on a Short Sunderland as a passenger. He told me he loved the bacon and egg on the aircraft as they flew over the sea.

He loved Reykjavik, but it was very cold. He said it was the only real adventure he had before flying back to England in an Avro Lancastrian at the end of his stint there.

He never flew as a pilot but ended up with rank LAC (Leading Aircraftsman) before leaving the RAF. As well as the planes he was in during his RAF days, he also rode in in Oxfords and Anson types from RAF Lulsgate in his ATC days.