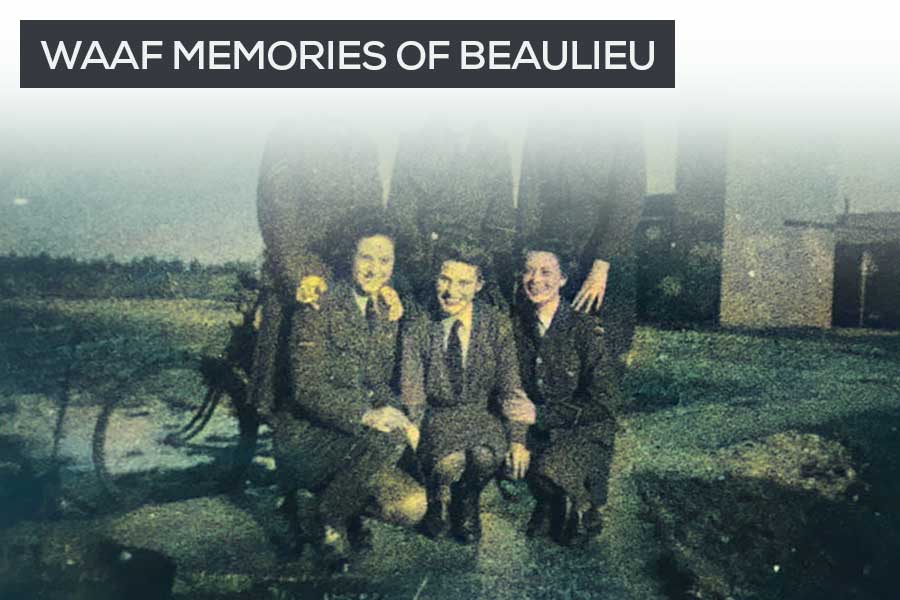 In 1983, Robert Coles, the local author of the “History of Beaulieu Airfield” book received a letter from a former WAAF who had been stationed at the RAF Beaulieu airfield during the Second World War. Bob’s book had been published in 1982 and was the first time anybody had written a book on the topic of the airfield.

From what I can gather by reading various pieces of correspondence, Mrs Burgess was now in conversation with Robert Coles, as her memories would help him research and publish new information on the airfield. It’s probable that the details I include here would have featured in a future book.

Unfortunately, Bob passed away before he could publish more on Beaulieu Airfield and so this never happened.

The Women’s Auxiliary Air Force (WAAF) was the female arm of the Royal Air Force during World War II. By 1943, WAAF numbers exceeded 180,000, with over 2,000 women enlisting per week to help with the war effort.

Whilst WAAFs did not participate in combat, they still had dangerous jobs in England and on airfields such as Beaulieu. In fact, Mrs Burgess who wrote the letter lower down the page, had a serious accident herself whilst serving in the New Forest.

They might also have worked in intelligence, working with codes, ciphers, and analysing reconnaissance photographs.

At Beaulieu the women were stationed on the WAAF Communal Site just to the southeast of what is now Roundhill Campsite. The only surviving aspect of the WAAF area are the Stanton air raid shelters on private land.

Today I am able to reproduce parts of the letter Mrs Burgess wrote, with kind permission of Tony Johnson. Tony is a guardian of some of Bob Cole’s work and documentation. In the correspondence, Mrs Burgess describes her time on the airfield.

May I first acknowledge receipt of my copy of the “History of Beaulieu Airfield” which I found to be extremely interesting.

I have many memories of Beaulieu, some happy and some not so happy. We WAAFs worked very long hours and there were few personal comforts to be had. I looked after some 38 officers from 224 Squadron, 300 OUT personnel and 311 Squadron.

The Czech element were difficult to understand as they spoke little English but even despite the language problem, we felt the same concern for them when they failed to return to Beaulieu.

I have in my possession the Czech Squadron handbook “Czechoslovaks Flight to Rebuild” based on 311 Squadron and their training at Beaulieu which contains a number of pictures. Have you seen this? I knew them all, Squadron Leader Basil Peachy, their Padre and I become good friends.

You asked about photographs. Personnel were not to my knowledge allowed to have cameras, but a Canadian did take two photographs of me inside the camp area and I have these, but they only show a few hutments.

If my memory serves me, we were the second airfield to have radar equipped planes which at that time were highly secret.

We lost a number of planes due to explosions in the air near the airfield.

The RAF Regt shared the surrounding woods with the Second Front equipment – lorries, guns, shells, and bombs. Great damage could have been done to the local area if a plane had ever crashed directly on these.

We also accommodated some ATC personnel and 600 sergeant pilots all in training.

We had occasions when we received a visit from a B29 or an American Navy Plane because of operational damage and we invited the crews to the WAAF dances. This was not at all popular with our lads and we did learn that many of these emergency landings were contrived because it was considered that we had the prettiest bunch of WAAFs in all of England.

One incident I recall was that an ME flew over the HQ buildings when I was making a call there, it flew so low that you could see the pilot clearly. He made a few turns but for some odd reason nobody seemed very concerned because he was only taking photographs.

I believe that 224 Squadron made what was considered to be an unpopular move to our sister station at St Eval in Cornwall although the precise date of this move now escapes me, but I do remember one of my officers flying back to see me.

Rather tragically he suffered from acute air sickness, and this had the effect of changing his blonde hair and moustache completely white. I remember that his great friend was PO Douglas Mann.

Another recollection is that of much decorated Squadron Leader Bullock who was stationed at Beaulieu during my time there. He was noted for his U boat kills.

One amusing incident arose when a girlfriend and I found the WAAFS Naafi on fire. Although we worked like beavers to put the thing out my friend had the unfortunate and unfair task of clearing up the mess – I was on duty elsewhere.

While I was at Beaulieu, I was coerced into doing some crooning with the band. I thoroughly enjoyed it, but I had no professional experience. As a sort of reward for my efforts, Squadron Leader Sutherland would send me a red rose.

As you would expect, there was a more serious side to things. The Naafi near the water tower was our meeting place for coffee at 11am, each day where we would chat to the air crews before their flights. We then sat there counting the planes on their return and it was upsetting to learn that chaps you had been with hours earlier would not ever come back.

So much for my memories of the social history of Beaulieu at that time.

My personal record is that I joined the WAAFs in 1942 on call-up because my boyfriend was in the RAF. He had been shot down and was now POW in Stalag Luft III following a raid on the Tirpitz (though he returned after the cease fire we did not marry).

I was disabled out of the WAAFs after a severe accident at Beaulieu. I was sent to Lymington Hospital and then on to the Canadian Military Hospital at Hackwood House, Basingstoke. An American surgeon saved my life although I still receive a major war pension from the State.

I returned home as a civvy only to experience the worst of the London Blitz.

It has been enjoyable remembering those days at Beaulieu and I hope that my ramblings may help you get a mental picture of the day to day like at the station during 1942 to 1943.

Editor’s Note: If you are a family member and you would like to get in touch, please do via the contact page. I will be able to put you in touch with Tony who holds the correspondence and make any adjustments to this content if requested.