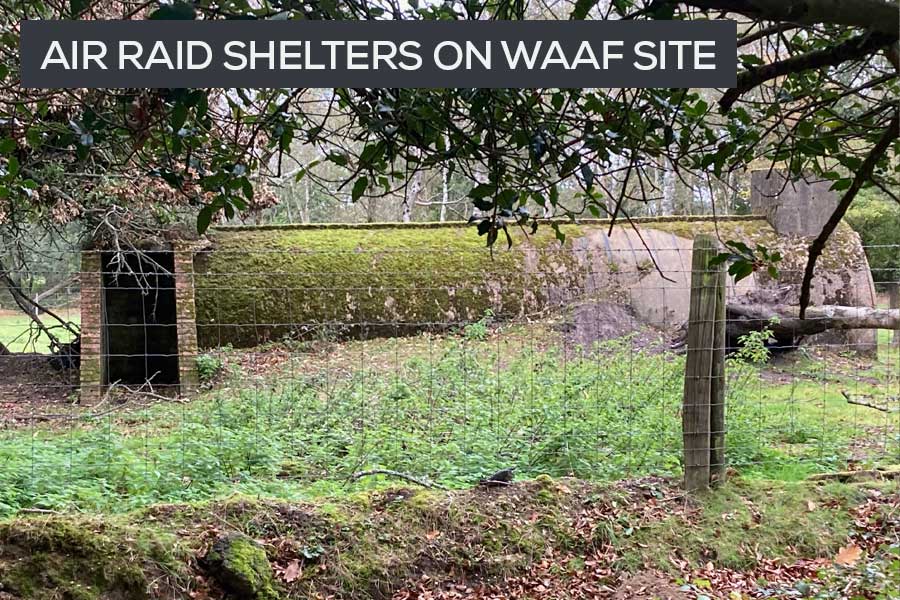 When Beaulieu Airfield was handed back to the Forestry Commission in late 1959, the buildings and structures would have been dismantled.

As a consequence there no structures left standing on the publicly accessible site of RAF Beaulieu. That’s with exception to one which is the water tower, and even then, the tank element was replaced in 2014.

However, that doesn’t mean there aren’t still other wartime structures left over from World War 2 in addition to the water tower. There are still some standing, but they are on private land. An example would be the two air raid shelters near Roundhill Campsite.

These two outstanding examples of Stanton air raid shelters are in a farmer’s field running adjacent to the airfield’s land perimeter. They are located on what would have been the Women’s’ Auxiliary Air Force (WAAF) Site No.2, just down from the WAAF Communal site – read memories of a WAAF here.

During WW2, there would have been multiple buildings on the WAAF Communal Site and WAAF Site No. 2, including the airwomen’s barracks, sick quarters, dining rooms, and washrooms. In fact, you can still see concrete bases in the ground near the air raid shelters where some of these buildings would have stood.

The two Stanton air raid shelters in the area (known locally as Dilton Rough) can only be seen from the fence line. They are in a farmer’s field, so if you stand at the fence boundary it offers an excellent vantage position to see them up close.

Important: These are on private land. The photos I have taken were from the fence. Please respect the privacy of the landowner do not enter their land.

The fact that there are on private land is why they survive today. During the war, the farmland would have been requisitioned from the landowner, then handed back afterwards.

The generations of farm owners have decided to keep the air raid shelters at RAF Beaulieu standing. Whether that’s for practical or sentimental reasons I don’t know, but I would love to speak with them to fill in any gaps on their history. If you are reading, please email me.

If you want to see them, watch my film below. I explain more about them from the fence in one of my RAF Beaulieu walk videos. Watch from the 9 minutes and 30 seconds point.

Stanton air raid shelters were manufactured by the Stanton Ironworks Co Ltd in Derbyshire (better known for sewage pipes & manhole covers) as part of the Second World War effort. According to historical records, the company manufactured 100,000 tons of concrete, primarily for air raids shelters used by the Royal Air Force.

This air raid shelter design was used a lot on WW2 airfields.They could be built in any length but usually consisted of 18 sections of pre-cast concrete arched-shaped sides, bolted together to form a standard Air Ministry shelter for 50 men or women.

The entrance could be brick-lined and with concrete steps (if required) with an emergency escape hatch at the rear. They were often above ground or semi-sunk, but for added protection and concealment purposes, further blast walls were added and all covered with soil and turf.

It’s not known how many were built or survived, but many were located near airfields most of which have reverted back to private farmland and many shelters demolished.

Stanton air raid shelters were extremely strong due to the design. They were able to withstand a lot of shock and compared to other air raid shelters you still see around Britain, are still in excellent condition.

They had a simple design which was cheap to manufacture, including the following elements:

Stanton air raids shelters were modular and could be built to any length. However, the ones you see standing today like the ones at Beaulieu tend to be constructed from 18 segments and would hold 50 people.

If you look closely at the Stanton air raid shelters at RAF Beaulieu, you can see what look like chimneys on one end.  These are in fact emergency escape hatches and would have been used if the main entrance had been damaged.

Some of the reasons why Stanton air raid shelters were so popular was not just about their strength and modularity, but also how easy they were to transport. The segments could be carried by hand with a crew and taken to where the bomb shelter needed to be erected.

In my video, you can see the two RAF Beaulieu air raid shelters in a field. I would imagine that this would have been a hard location to get lorries to, particularly with the trees in the way – if they were there at the time.

Airfield staff could have carried the segments to the site and erected the Stanton air raid shelter in a reasonably quite time without need for a vehicle.

Once put up, it was common for earth to be piled up against the sides to offer protection from flying debris, as well as acting as camouflage of course. You can still see elements of that in my photos where trees have even grown.