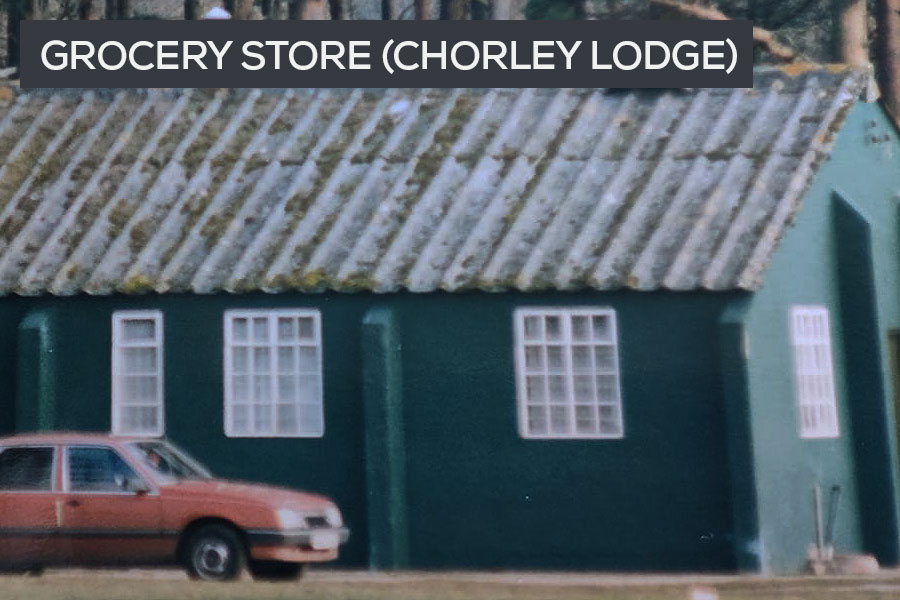 During wartime there were a number of buildings erected at RAF Beaulieu to make the airfield effectively function as a small town. It had all the amenities you would need for over 2,000 staff to live and work in relative comfort considering the jobs they had to do.

One such building was the grocery and local produce store that stood near the water tower on what is now Roundhill Campsite.

If you walk this route today you can still see the concrete base upon which it would have stood.

The evidence is to your left hand side as you walk into Roundhill Campsite, from the an easterly direction away from the Hawkhill and Stockley Inclosures.

Post-war use by the New Forest Scouts

The airfield closed in 1959 to be managed by the Forestry Commission. At some point after that, the majority of buildings on the airfield were demolished, with exception to the grocery store building on RAF Beaulieu’s Communal Site 1.

Not long after, the airfield grocery store building was handed over the the Scouts, where it became the HQ for the 8th Wimpson (West District) scout troop. It was also used to host bingo evenings during the same period.

The large hut was renamed as Chorley Lodge, and become a much loved destination for children in the local area who visited Roundhill. The following quote was lifted from the Southampton City Scouts website:

“Chorley Lodge became a well known venue in the New Forest for Scouting and other young people for 40 years. For all that time one person undertook the responsibility of the booking and administration her name was Dorrie Heather. She was, until recently, a member of our Scout District with her husband Fred. They were both very much concerned with running the 8th Scout Group who were in fact the owners of Chorley Lodge throughout that time.”

I was also given the following comment from Dorrie Heather’s son, Bob Heather, in May 2021:

“My father was a Group Scout Leader and managed to purchase one of the buildings on Beaulieu Airfield in the late 50’s, and was used as a scout camp base named Chorley Lodge, named after two scout leaders. Scouts from all over the world came and stayed there. My mother was the booking agent for it. It was eventually deemed unfit for use in the early 90’s and was demolished. The concrete base is still there next to the water tower near the campsite.”

I am told that the building had no electricity or sewage system so was extremely basic when used by the Scouts. However, during wartime, it’s likely it would have been connected to the airfield’s electricity supply when operational.

Here’s a photo that a local gentleman gave me. I would estimate that it was taken in the early to mid 1980s when it still served as a scout hut a few years before it was destroyed.

According to press reports and memories relayed to me by people who were in the scouts, the mid 1980s saw the beginning of the end for Chorley Lodge.

It was subject to an arson attack twice, the second fire happening whilst it was being repaired after the first fire.

This was likely the death knell for Chorley Lodge at Roundhill Campsite. Southampton West District also owned another scout hut/cottage at Wilverley Enclosure. Financially the district couldn’t run both and had to choose one.

It was decided that because Hampshire scouts already had Fernycrofts they opted to keep Wilverley.

Chorley Lodge was closed down, and the old scout hut on Roundhill was removed.

What still exists today at Roundhill

Which brings us up to speed with modern times. All that is visible now of the scout hut and grocery store site is an expanse of concrete on the ground.

You can see me point out the visible foundations at around 3 minutes and 25 seconds into the video below.

Like much of RAF Beaulieu, it is slowly being reclaimed by nature.

If you had been on the airfield during wartime, here’s a mock-up of what you would seen. This image is courtesy of a flight simulator route that Terry in Dorset at RAFIbsley.com created, with my location notes over the top.