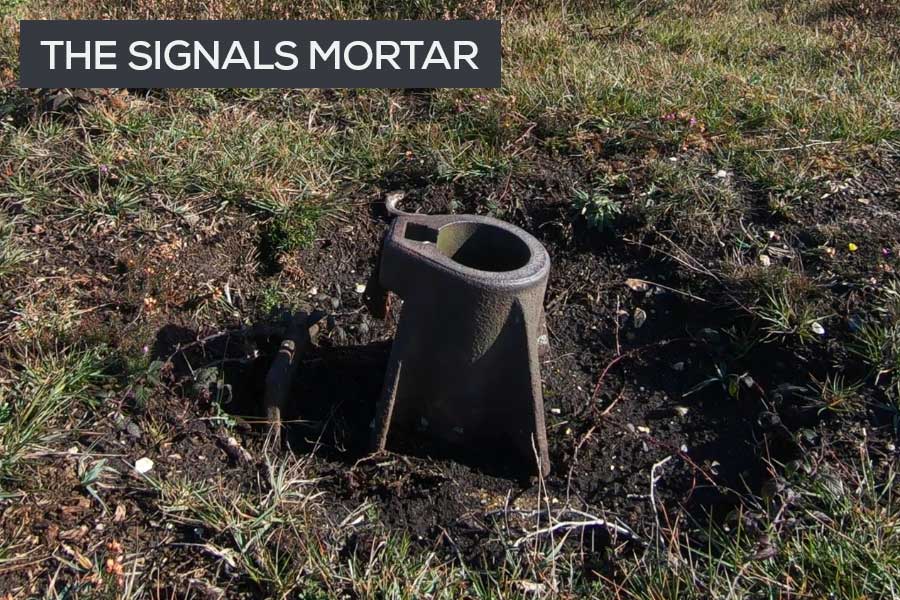 If you visit the site the location where the control tower (aka watch office) used to stand in the northern part of the airfield you might stumble across (or even stub your toe on) a thick metal tube embedded into concrete then set deep into the ground.

Located a few meters in front of where the control tower would have stood, it’s what is known as a signals mortar and was an essential safety aspect for wartime flights.

You can see the location of the signals mortar in the image below and how it was positioned in relation to the other buildings and components.

It’s a 5-inch mortar socket, and it was designed to fire a large flare straight up into the air. It’s location near the control tower was essential, as it was the operators in their who would trigger it to help pilots in bad weather or poor visibility.

The RAF Beaulieu signals mortar would be used as a last resort if the pundit code and pundit beacon weren’t visible to the pilots coming into land. For example, perhaps when there was thick fog and lights, land, and the very pistol (flare gun) could not be seen by air crew.

Once fired, this wartime WW2 signals mortar would shoot a brilliant flare into the sky, perhaps thousands of feet through the air, able to pierce through clouds and fog. The pilots would then know where they were, and could proceed to land, or go on to a different airfield.

By using the emergency guidance to the airfield, the controllers at RAF Beaulieu could help pilots make a safe landing. I am not 100% sure how the Beaulieu signals mortar would have been activated, as there are two possibilities.

It might have even been a mixture of the two, where the electrics activated a pull on the wire to then pull the trigger on the signals mortar.

Handy Hint: You can see me finding the signals mortar a few minutes into one of my RAF Beaulieu history walk videos.

As well as the signals mortar on Beaulieu airfield, there are a couple of other examples still in existence which we can use for comparison.

The one below is found on the RAF Harrowbeer airfield in Devon and looks almost identical to the one at Beaulieu. The Harrowbeer one is a 3-inch signal mortar, so a little smaller than the Beaulieu one, but certainly the same design.

There is also a signals mortar on the roof of the control tower at RAF Ibsley. The one at Ibsley is said to have been fired by pulling a wire attached to the base.

I also found a forum post from a gentlemen attempting to identify what looks like a WW2 airfield signals mortar.

Again, it looks almost identical to the signals mortar found on the RAF Beaulieu Airfield, but this time with a longer tube still attached into it.

Perhaps a similar tube would have locked into the mortar on RAF Beaulieu? I think it’s a valid assumption to make given the similarities.