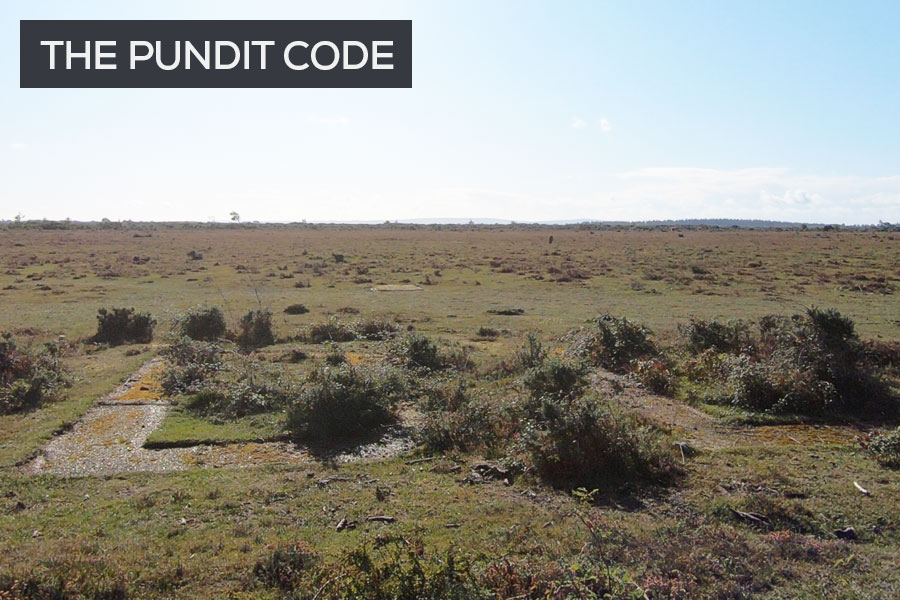 Towards the north of the airfield is where the control tower would have stood. You can still stand on what’s left of the crumbling base of the signals area, and look out across the airfield.

A few yards down from the control tower position and signals area foundations is the RAF Beaulieu pundit code. It still exists today; you can see a photo of it that I took in September of 2020 here:

As you can see, the letters are starting to be reclaimed by nature, just like so much of Beaulieu’s WW2 airfield is. When I first visited the BL letters in 2020, moss was starting to grow on them, with grass encroaching over the concrete lettering.

Compare this to a photo of the RAF Beaulieu Airfield pundit code taken in 2013 by the New Forest National Park Authority. See that below.

As you can see, there appears that there had been a clean-up operation on it at some point – you can see where spades have been used to cut back the turf.

The concrete letters have also been scrubbed back to something resembling their wartime state.

In the mock-up below, you can see the position of the Pundit Code in relation to the other buildings and components that were close to the control tower.

The pundit code changes from BL to BQ

I’ve not been able to find an exact date yet, but at some point, the BL pundit code changed to the BQ letters. This is based on an entry for RAF Beaulieu in the book “RAF Airfields of World War 2” which lists BQ and not BL as the pundit code.

An author writing for the New Forest Remembers project in 2013 also said this:

“The concrete code would have been laid down before the airfield opened, part of the technical site along with the tower and signal square. It was probably covered over when the code was changed at the war’s end. This is why it is not visible in the 1946 RAF Aerial above, though the area of the control tower is marked in red.”

Note where the author states “when the code was changed at the war’s end”.

Based on this evidence, I am reasonably confident that the BQ letters were used post-war, during the period the Airborne Forces Experimental Establishment (AFEE) used the airfield.

This assumption is also backed up further by illustrations drawn by author Alan Brown, who worked at the AFEE during this time post-war.

Below you can see one of his illustrations of how the airfield was set-up for the AFEE from 1945 to 1950 just before it closed. Notice the BQ letters in front of the control tower on the top right.

There are also metal stakes that surround the pundit code square. They are in the corners with some sill existing on the sides too.

I have a couple of theories about how these could have been used – both of which relate to the letters changing to BQ from BL after the war.

The stake points face inwards which suggest they might have held something in place. Here’s another example below.

Before you read on, the pundit code is sometimes referred to as Beaulieu Airfield’s letters – and this is where it can be confusing because there are more letters over the road from the RAF site.

If you cross over the B3054 you can walk to the site of the original Beaulieu Airfield at East Boldre. This was used during the First World War.

From the air you can see the letters spelling out the word BEAULIEU on the site of the original airfield. See a Google Maps screenshot below.

These letters were originally placed between 1910 and 1916. They were restored by local villagers from East Boldre in 2012 as they had started to completely disappear.

Possible restoration of the RAF Beaulieu pundit code from WW2

Having seen the state that the RAF Beaulieu Airfield pundit code is now in compared to the cleaned up one at the original East Boldre Airfield, I made a tentative enquiry to the NFNPA about volunteering to clean it up.

It was explained to me that I would be breaking the law and possible bylaws if I attempted to clean it… so for now, I won’t be suggesting anybody does that.

A synopsis of what the NFNPA told me is as follows:

When on the heath you should take care not to disturb anything. Even the clearing back of vegetation and soil from a feature, for example, concrete, could be deemed illegal.

There are a number of Scheduled Monuments in the RAF Beaulieu area and to disturb them is against the law as criminal offence. Much of the New Forest National Park is also a Site of Special Scientific Interest and other designations – so again disturbance is against the law.

But there is some possible light at the end of the tunnel.

A member of staff at NFNPA explained that in the future we could apply to the different bodies involved to get permission for a clean-up of the pundit code.

However, it was explained that this could be time consuming, and there no guarantee that all the needed permissions would be given.

I will continue to enquire about this, and will follow it up in 2021 to see if becomes a possibility.

Fingers crossed as it would be a absolute travesty for RAF Beaulieu’s history if the pundit code was to disappear under the heathland.

The role of the RAF Beaulieu Airfield pundit code

During the Second World War, all airfields were given a unique two letter pundit code. They were designed to be 10 foot high, made from concrete set into the grass, and then painted in white. This enabled the pilots to see them from the air during the day and identify the airfield.

In an area like the New Forest which had 12 wartime airfields this would have been essential. In close proximity to RAF Beaulieu there was RAF Lymington and RAF Needs Oar Point – landing at the right airfield was possibly a concern for pilots new to the area.

Here’s a Google Maps screenshot taken in 2014 after the letters BL had been cleaned. This demonstrates how the pundit code would have been seen from the air.

You might be wondering how this identification worked at night or in bad weather. In bad daytime weather there was a signals mortar which could fire a signal into the air.

During night flights, RAF Beaulieu had a pundit beacon. This was lighting that would flash the BL pundit code letters in Morse code.

The pundit beacon light was not on the airfield itself. The flight crews would had been briefed on how far the pundit lights were from the WW2 airfields – this would help prevent identification by German bombers to strike the airbase at dark.

If you do decide to visit the pundit code yourself, keep an eye out for the signals mortar. It can be a little hard to find, but is set into ground between the concrete foundation base of the control tower and the Beaulieu pundit code letters.

You can watch me finding all these relics in my first RAF Beaulieu walk. For more Beaulieu Airfield walks, click here.