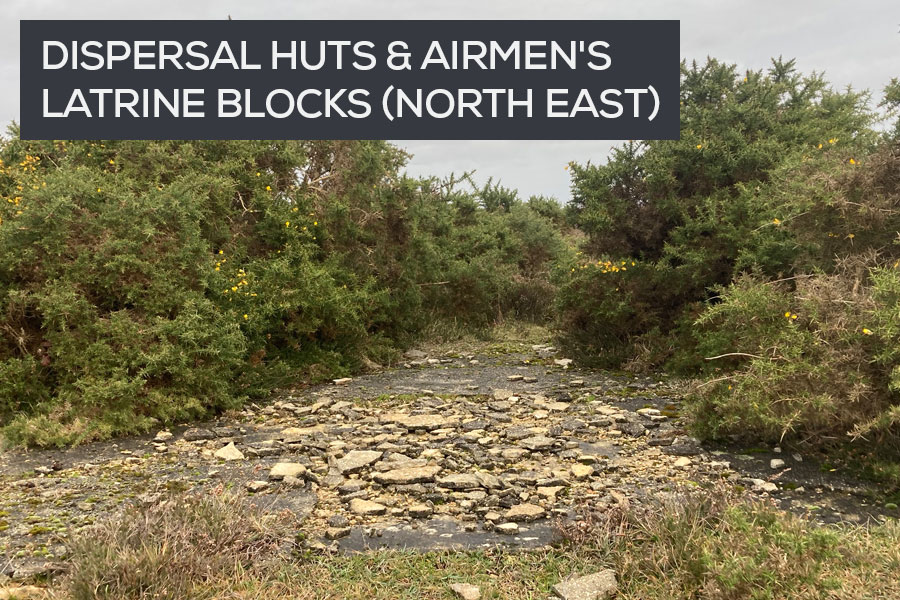 To the North Eastern side of the RAF Beaulieu airfield perimeter there were 15 hardstands. Hardstands are those “frying pan” shaped dispersal areas that surround the airfield. You can still see some of them outlined an aerial photo views today.

Hardstands were designed to let heavy vehicles sit on them, in this case bomber plans, without them sinking into down into the earth. The Wikipedia entry explains how they would work at a WW2 airfield:

“Hardstands were placed along the perimeter track, made of concrete, with their centres at least 150 feet from the edge of the track. The purpose of the hardstands was to allow aircraft to be dispersed some distance from each other so that an air attack on the airfield would be less likely to destroy all the aircraft at once.”

The hardstands are not positioned close to the living quarters, so there would have been a requirement for out-buildings near these areas for use by the crew.

That explains why there were 4 dispersal huts and latrine block pairs positioned in between the hardstand “frying pans” on the North Eastern side. It meant that they could be accessed in just a short walk for any crew working this side of the airfield.

To date I’ve managed to find the ruins of 2 of the dispersal huts and airmen’s latrine blocks; numbers 76 and 77 from the wartime map. So far, I’ve not been able to find evidence of 74 and 75 yet so will revisit when I get time.

The first dispersal hut and latrine remains I found were between dispersal areas 14 and 15, in a westerly direction from Hatchet Pond.

Dispersal areas were the “frying pans” at the most eastern point of the airfield.

There are two areas with visible building remains. A larger area which had lots of broken cement. My assumption would be this larger area would have been a dispersal hut – number 77 on the wartime map.

There was then a smaller area of darker foundation, which could have been the latrines. I don’t know for certain, but the area below was a few metres away from the possible hut foundations.

I then walked 5 minutes back towards the perimeter track to find the remains of number 76 on the 1945 buildings schedule – another dispersal hut and latrine site.

These were a bit harder to find, being located between dispersal areas 10 and 11. There’s a lot of gorse here and it’s very wet in the winter.

Initially all I could find was pieces of brickwork in the ponds, but no signs of any foundational work or concrete bases.

It took a little longer, but after moving through the gorse bushes I managed to find some old flooring. It appears that the dispersal huts in this area have been overgrown and covered over time.

I also attempted to locate numbers 74 and 75 which are further up the perimeter towards the Northern point of the airfield.

Unfortunately I had no luck in locating what I would consider evidence of remains. I will go back and investigate again though after looking at LIDAR scans to see if I can get a better set of co-ordinates.

The role of dispersal huts on WW2 airfields

The function of dispersal huts on wartime airfields was to serve as an area for the fighter pilots. This meant they were able to scramble at a moment’s notice when called upon, due to the close proximity to the “frying pan”dispersal areas.

However, RAF Beaulieu’s main use during World War 2 was as a bomber base. That means there is some conjecture over exactly how the dispersal huts would have been used, and what they even looked like.

We can make some assumptions though; the huts would have been there for the crew to use before leaving for a bombing raid, or if they were on a delayed take-off.

More assumptions are based on the type numbers each structure has been listed as on the wartime map. It’s then possible to compare these type numbers to what exists at other WW2 airfields in the UK.

I’ve attempted to do that below.

The dispersal huts to the north east of RAF Beaulieu’s wartime airfield map are listed as type 2965/42 and as “N”. This suggests that it would have been a Nissen hut.

There are no photos of what Beaulieu’s dispersal huts would have looked like so I don’t know for certain – but Nissen huts all follow a similar design, so you can expect it probably looked something like the photo below.

Whilst researching the 2965/42 design from wartime airfield, I also found the photo below – from a Welsh airfield. This is also listed at 2965/42, but isn’t a Nissen hut.

I believe the disparity could be due to a number of reasons, but the bottom line is, these wartime WW2 airfield map numberings don’t always appear to be 100% reliable.

The latrines on RAF Beaulieu’s wartime airfield map are listed as type 9026/41. There are no photos of what Beaulieu’s would have looked like, but we can find examples around the UK that still exist today.

Below is one that still stands at RAF Culmhead in Somerset.

The type 9026/41 latrines were constructed with rendered cement and 4.5 inch thick brick walls. Over the top would go a steel truss to support corrugated asbestos sheeting.