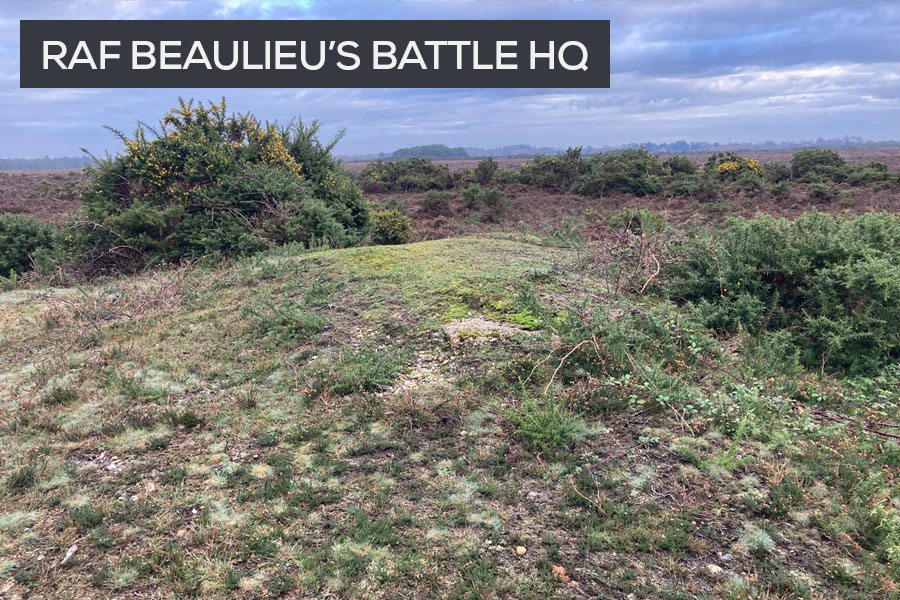 One of the structures that has fascinated me more than anything is the RAF Beaulieu battle headquarters. This was an underground bunker, also known as a battle HQ or command bunker… the style of which would have been found on WW2 airfields across the UK.

According to the BattleHQ.info website which documents these structures, bunkers like the RAF Beaulieu battle HQ were:

“Found on many airfields and served the purpose of giving the defence officer a hardened and secure location from which he and his staff could coordinate the defences of the airfield in the event of an invasion by hostile forces.”

On the 1945 airfield map I have, the RAF Beaulieu underground bunker was situated to the north east of the airfield perimeter, about a 10-minute walk from the 5th hardstanding dispersal area.

In other words, right in the middle of the heathland, so not the most accessible of places in the wintertime. I had to wear wellies and walk through a lot of bog to get to it… but it was worth the trip.

One wet morning I decided to go and see if I could find any remains of the battle HQ bunker, with just my dog for company. Here’s what we found (you can see more on the YouTube channel).

I’ve previously visited the battle HQ command bunker at RAF Ibsley, so had an idea of what evidence I would be looking for.

The only shame is; the Beaulieu one no longer exists. At some point in the past, it has been destroyed. The story goes that it was filled in with gravel, then had earth piled on top.

But, I still wanted to locate the position.

As you can see in my video, I used a mix of the old 1945 airfield map and a more modern report from 2015. In that report, archaeologists had searched for the remains of battle headquarters at 4 New Forest airfields, using LIDAR scanning.

They used LIDAR to scan the airfields and found evidence of earth disturbance and a possible structure where the bunker site should be on the Beaulieu site. From what I can have learned, LIDAR is recorded using systems on airplanes.

I then used their research to pinpoint a GPS location for the RAF Beaulieu bunker. As you can see in my video, that took me straight into some bushes, so my suspicion is the research team from 2015 never had actual boots on the ground… only relying on the scans.

If they had visited the location, they would have found what I did… evidence of the underground bunker being backfilled with gravel, and then having earth piled onto the top of it.

Despite that, I wanted to find out as much as I could about the RAF Beaulieu battle HQ, including when it was filled in, the design, and any history.

Below are my notes, and I expect this to be a resource that is updated as I learn more with the help from local authorities and experts.

When was the underground bunker filled in and destroyed?

I read a comment on Facebook from a guy who claimed to work for a company that was contracted to destroy the bunker HQ in the year 2002.

I cannot find any evidence to support this. But it certainly appears that some efforts were made to fill the bunker as there’s a lot of gravel on the site in a 50 metre or so radius.

However, I think it was filled with gravel and buried many years before 2002, for a number of reasons.

I needed to find out more, so contacted a number of organisations who I thought might be able to give some insight into when the bunker was filled with gravel and buried.

The first organisation I contacted was The Verderers Court of the New Forest. The verderers are responsible for protecting the New Forest’s commoning practices and conserving the traditional landscape and cultural heritage.

Unfortunately their spokesperson was unable to offer any insight into the destruction of the underground bunker.

“I have spoken to one of the Verderers who thinks the airfield was probably restored sometime in the 1950’s. Apparently there had been a suggestion of keeping it for a commercial airfield but that idea was quashed and once that happened the area was restored with a view to it returning to heathland.”

On their advice, I decided to then contact Forestry England who are responsible for Beaulieu Heath. I noticed it was possible to get records from them.

After requesting the details on a freedom of information request, I expected them to source documentation as part of this request, but it wasn’t the case. The email I received back was as follows:

“This is before the time of many of us but feel that the infilling may have been done at the time that much of the surfaces of the airfields was removed in the 1990’s as per an original agreement that was in place that pretty much stated that once there was no longer a strategic need for them, that they should be returned to their former use.”

I might go back to them again with this.

But, on a positive note, Forestry England did put me in touch with a contact at the New Forest National Park Authority who has been very helpful.

At this point in time, my contact is unable to research properly into the NFNPA’s files due to Covid.

However, he has said that next year he would be prepared to meet with me, and could look into their huge archive of off-line files.

This could allow me to find out more about the history of the RAF Beaulieu command bunker.

All I can say is, please watch this space and join the Facebook group where any updates to investigation will be posted first.

Since initially writing about my findings above I have been in contact with some more local historians and archaeologists who were kind enough to share their own opinions with me on when the Battle HQ was destroyed.

The most helpful was from Anthony Pasmore who emailed me the following:

“I imagine quite a bit of this was underground (as with the Ibsley one), but the RAF photo for April 1946 shows a square structure in the white area, so it must have been standing then. The airfield survived longer than most in the New Forest and was briefly reopened in the 1950s. It was returned to the New Forest in March 1960, but probably not fully restored at that stage. The attached photo is dated 13th June 1968 and the site is clearly demolished by that stage. My guess is that it was demolished some time between 1950 and 1968, but the tree/bush clump in the photo suggests more likely the earlier date.”

Anthony is referring to the aerial image below where you can see it appears the HQ had been destroyed at this point. I’ve highlighted in the area in red.

What design was the RAF Beaulieu battle HQ bunker?

In my photos it’s not easy to get a good feel for how the bunker would have been shaped.

What you can do though, is clearly see the hump and what appears to be the roof.

My initial thought when reaching the bunker location on Beaulieu Heath was that it could be similar to RAF Ibsley’s battle HQ, shown in the photo below.

However, upon reflection, the hump I was stood upon looked too small. The Ibsley one is of a larger design, having 2 cupolas (the protruding roofs).

To get a more informed opinion, I called in the experts… Mike and Iain who run an independent record of battle headquarters on WW2 airfields. You can see their website on BattleHQ.info.

The first thing they said was that 1970s OS mapping suggests the RAF Beaulieu bunker was already flattened. However, they did make the caveat that historical OS mapping cannot always be relied on.

In terms of a design, it is listed as being to drawing 11747/41. But there is no way of knowing if the bunker actually was as these references are a guide only – there is no documentation for this type of design.

However, Iain and Mike did give me the following opinion:

“In terms of the design, the only BHQ to that design that I know, is extant and cannot be accessed for photography or to create an accurate plan. However, I can say that the RAF Beaulieu BHQ is likely to be much like the 11008/41. The overall length and layout would be similar. So, same distance between entrance and cupola. The only change is likely to be the PBX room and/or sleeping quarters.”

Based on what the guys at BattleHQ.info can surmise, that means the RAF Beaulieu command bunker, “might” have looked like the plan below.

Unfortunately, unless Forestry England and the New Forest National Parks Authority decide to reverse the decision, and excavate the bunker location, we don’t really know.

If they do decide to do so after talking with my contacts, I will update this resource.