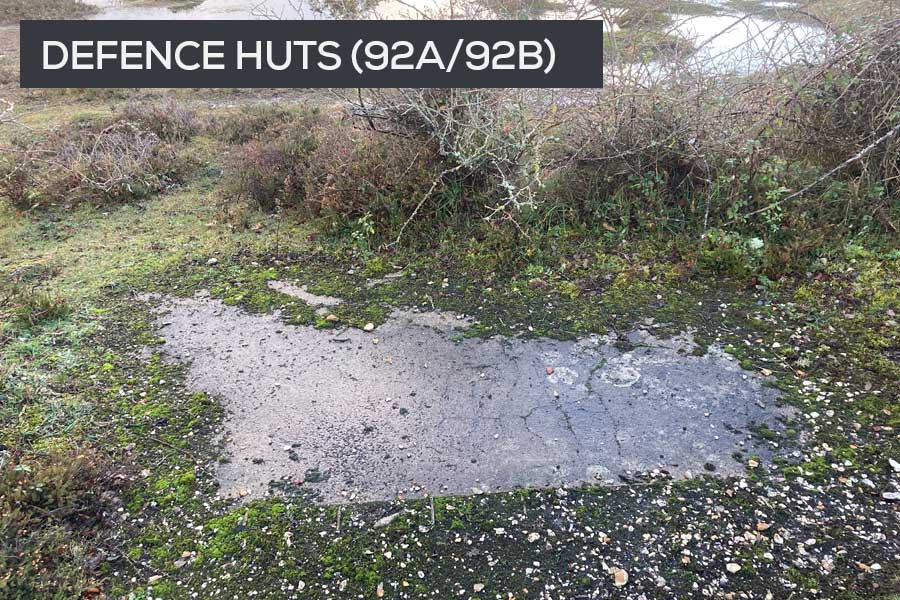 This week I had an explore on the boggy landscape of Beaulieu Heath. It’s winter right now, and I was near the end of the streams that run from Hatchet Pond. You will you need your wellies if you’re going to do this yourself!

I walked up from the North East of the perimeter track. I was attempting to find any evidence of the 2 defence huts that would have been situated in a northerly direction up from the 5th and 6th dispersal area sites.

On the 1945 map of the RAF Beaulieu airfield, these two defence huts are listed on the schedule of buildings as 92a and 92b.

I suspected I would find something, as looking at Google Earth satellite imagery from 1999, you can see what appears to be a uniform square area. That’s usually a signal to me that I am going to find something.

You can see where the 1999 Google image and the 1945 map compare in the image below. I’ve highlighted the defence hut locations on both.

After a 5-minute walk from the perimeter track, I hit the spot highlighted in red above. I quickly found evidence of where the northern defence huts would have stood.

There isn’t much to see, but certainly what looks to be concrete or asphalt in the ground, loose bricks, and the imprints of what appears to be 2 buildings.

It wasn’t obvious which would have been which defence hut (92a or 92b), as the imprints appear to be positioned parallel to each other, rather than the configuration shown in the 1945 map.

There are very few photos of RAF Beaulieu from wartime, and as such I have been unable to find any photographic documentation of what the defence huts would have looked like.

However, we can make some assumptions which I’ve outlined below this next photo.

On the 1945 map of RAF Beaulieu, the two defence huts in this location are listed as being N or TB. In other words, a Nissen hut or a temporary brick building.

I don’t know for certain what they would have been.

However, I have been told that many Second World War airfields in the UK were left to their own devices as to how to build the structures.

How they decided to build could have depended on the supplies, or the intended use.

For example, given that RAF Beaulieu had a relatively short service life, you might assume they would go for the cheaper and easier option of erecting Nissen huts.

There is evidence of many Nissen huts on the airfield site so this to me is a good assumption to make.

In terms of their use, the defence huts could have been used for shelter and the storage of kit.

I did manage to find a photo from another wartime airfield, RAF Llandow in Wales, which could give an indication of what the RAF Beaulieu defence huts looked like.

This one in Wales is a Nissen hut, and it still exists on the site near to the RAF Llandow battle headquarters.

In a report by the Glamorgan-Gwent Archaeological Trust (view website), this defence hut design was described as:

“These buildings looked like the Nissen type of huts, but were without any internal framework. This is the most complete of the buildings on the BHQ site, though; it is in a poor state of preservation. The interior is divided into two separate rooms. The main room has a non-standard fireplace and range and a chimney stack on the exterior.”

The defence hut remains I found at RAF Beaulieu are also near the Battle HQ position.

Therefore I don’t think it’s a huge leap to posit that the Beaulieu airfield defence huts were similar to the ones still existing at RAF Llandow.

Thank you: Part of my research into the North Eastern defence huts was helped by Terry in Dorset. He’s responsible for the fantastic rafibsley.com website.