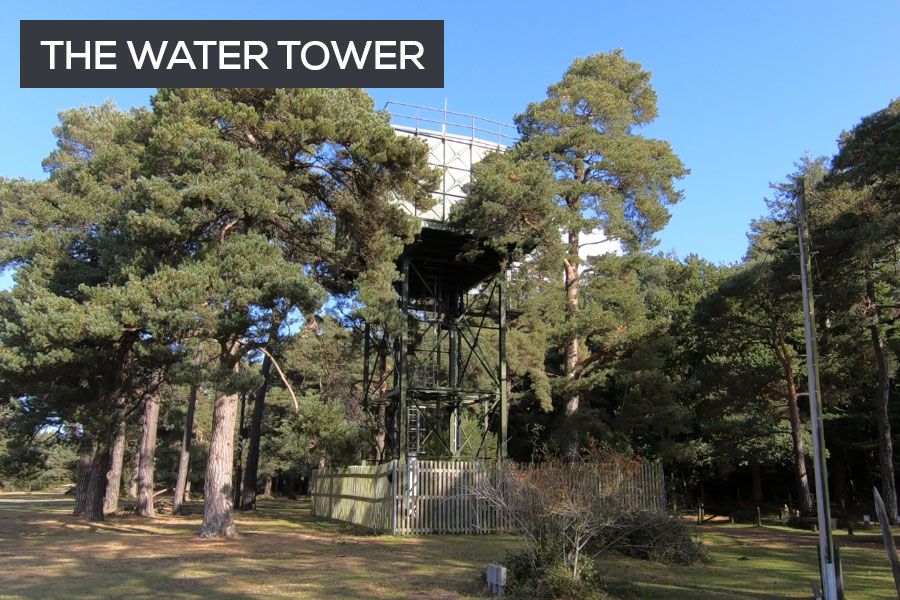 The RAF Beaulieu water tower still exists today and is about a 10-minute walk north west of the airfield perimeter. It’s located to the right-hand side as you walk into Roundhill campsite.

The water tower is listed as building number 136 on the classified schedule of buildings map from 1945. The map lists it as “water tower 50,000 gallons”, and it would have served the entire 2,000 plus airmen and WAAF women who served there.

If you use the 1945 map of the airfield as a reference, the water tower stands adjacent to Communal Site 1. Within yards of the RAF Beaulieu water tower would have been a number of facilities including:

I have numbered and marked these structures on the image above, kindly provided by Terry in Dorset who recreates WW2 airfields for the Microsoft Flight Simulator software.

It makes perfect sense that facilities such as the fire tender building, latrines, sewage, and showers would have been near the water tower.

You would also have found the usual accommodation blocks nearby, plus a ration store, all in close proximity to the water tower.

When you walk around RAF Beaulieu, the water tower is one of the last remaining structures left over from World War 2, and this is probably for a number of reasons.

Firstly, the framework was made from steel, unlike the majority of structures on the RAF Beaulieu site which were temporary brick or wooden. The water tank on top was also made from pressed steel, and included pipework.

In other words, it was built to last. It needed that strong steel framework in order to support the weight of 50,000 gallons of water that supplied the barracks and buildings.

Secondly, the Roundhill campsite water tower is still in use today.

When the airfield was handed back to the Forestry Commission in 1958, it would still have served a purpose to supply water to the campsite and surrounding areas.

Put simply, there was no need to tear it down unlike other structures on the site.

When you visit the water tower location on Roundhill Campsite, you might be surprised at how good it looks. It’s in remarkable condition and is obviously regularly painted and taken care of.

As established, it’s because it’s still in use.

But that’s not the only reason why the water tower and tank look so shiny and well-kept. I recently discovered that the framework has been refurbished and the tank replaced in the last decade.

Refurbishment of the water tower and tank in 2014

In July 2014 the water tower’s top tank was replaced by the Avon Construction company. They were kind enough to send me the following details from their corporate brochure:

“Avon Construction Ltd were awarded the contract to replace the existing water tower at Beaulieu RAF. The new pressed steel Braithwaite tank measuring 9.76 x 7.32 x 3.66m with external flanges is the same size as the existing tank but without a division wall and is for the storage of potable water.”

Potable water is another word for water that’s deemed safe to drink.

The project cost £250,000 and was completed on behalf of the Sembcorp Bournemouth Water company, taking 25 weeks in total.

Here’s a copy form their corporate brochure where they outline the project specification.

In the photo below you can see what it would have looked like before the refurbishment project. The photo is from October 2005.

Notice that in the above photo there was no fencing around the water tower base.

At some point, fencing has been put up to stop people from climbing the Roundhill Campsite water tower. You can certainly imagine how tempting it would have been for kids to scale it whilst on camping holidays.

If you want to see the RAF Beaulieu water tower for yourself, you can find the location on my map page.