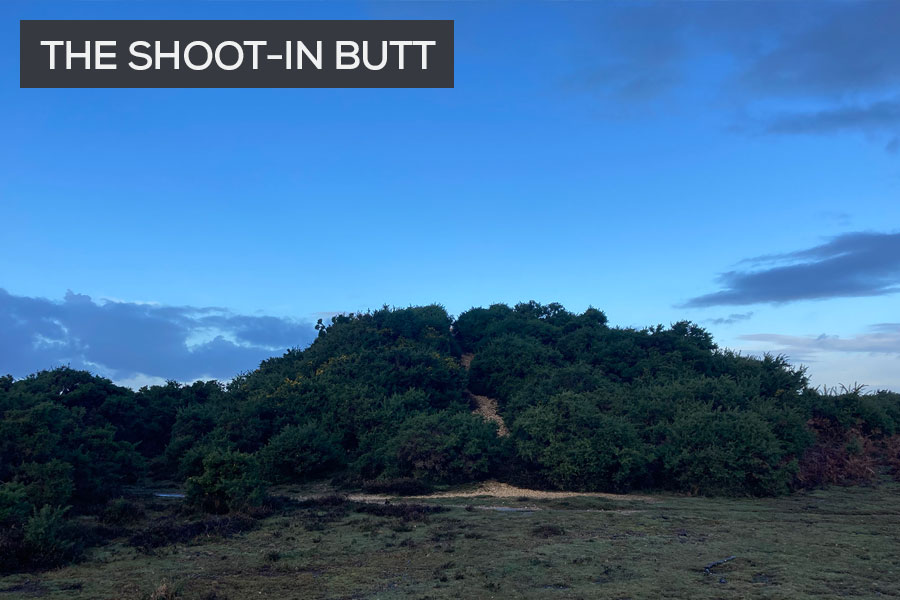 If you drive down the B3054 past the Beaulieu airfield towards Lymington, you might notice a large earth hump or mound on the heath to your right-hand side. It’s the one with visible walking gravel track going up through the middle of it.

I would often drive past this in the past, and used to assume it was a tumulus, or Bronze age burial ground. There are lots of tumuli in the New Forest, so it’s an easy mistake to make… but actually; it’s another RAF Beaulieu site of interest.

What you are seeing here is called the Shoot-In Butt, or Shooting-In Butt. Known by many locals as the “hump” or “mound”, the reason you see tracks over it is because it’s a popular walk and people naturally want to climb up to the top for some great views.

The purpose of an airfield shoot-in butt during World War 2, when the area was RAF Beaulieu (later USAAF Station AAF 408) was to help fire and sight aircraft machine guns. In other words, let the gunners or pilots calibrate the guns to ensure they were targeting accurately.

In RAF Beaulieu’s case, the aircraft would position themselves into dispersal pan 26 (one of the hardstand “frying pan” shaped areas) to the south of the airfield, and then face the shoot-in butt (aka the Beaulieu Heath hump) and fire at a target.

By zeroing their guns in on the Beaulieu shoot-in butt target, it meant the bullets would embed harmlessly into the earth in the large mound… instead of hitting the village of Pilley behind it.

This one at RAF Beaulieu is man-made. It was created by piling up earth into a hill. It’s quite unusual I believe, as many shoot-in butts at other WW2 airfields were building using brick enclosures with sand piled into them instead.

It’s very likely that the mound was created by a construction firm, such as Mowlems, using their diggers and men when the airfield was built in 1942.

Watch the video of how this shoot-in butt would work

In fact, local kids who grew up in Pilley in the post-war years from the 1950s onwards, used to visit the mound or hump and search for bullets. Here’s a memory I was given by a local man (read more here):

“I am 48 now and have so my memories of bullet digging and exploring the site from the early 1980’s. We tried to dig for bullets on the mound several times but never found a thing, which is why we assumed it must have been the plane guns as they were higher calibre and penetrated deeper?”

My son thought it was an amazing place to visit with our dog. Here’s a photo of him first scaling the gravel path up to the top of the Beaulieu hump which we now now to be a WW2 aircraft firing range target.

I have also been given the following comment, which is anecdotal, but adds an extra layer of detail to the

“In the 1950s, us kids referred to this as the gravel heap and it was much higher and steeper then. It’s quite eroded now compared to how it was, as we used to have an ever better views of the airfield. I remember having a good view of the hangar that washer that that side. I believe the heap of gravel was auctioned off in 1959, but never actually removed.”

The large pond / bowl is probably man-made too

When I visited the RAF Beaulieu mound, hump, or firing butt (call it what you will) with my son in late 2020, we noticed that there was a large pond behind it.

My assumption here, and I think it’s a good one, is that the large pond is a result of the earth being dug out and then piled up as the mound for target practice. It’s the only explanation for a large pond like that right next to the hump, so makes sense to me.

Nowadays it’s a great place to visit for a dog walk, or even a picnic in warmer months… although in dry months it will be a bowl rather than a pond.

You can access it by parking up in the Beaulieu Heath car park (see my parking guide) and walking in down the perimeter track, then cutting off down a track to it.

The shooting-in butt should not be confused with what appears to be the remains of a machine gun and rifle range to the west of this area. If you want to visit this yourself, view the location of the hump in my progress map.