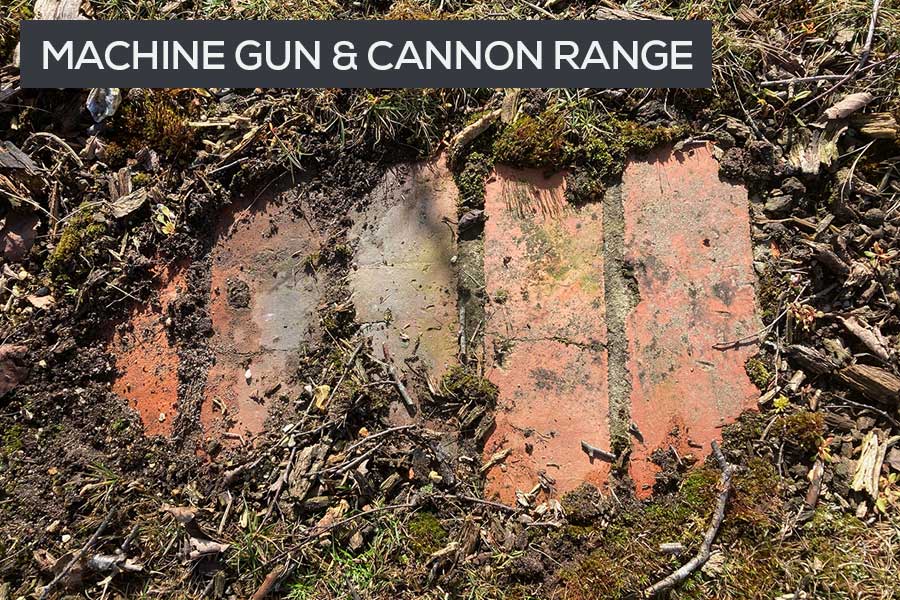 RAF Beaulieu was a Class A airfield. This meant it followed a template approach for Class A airfields of WW2, with similar buildings and facilities to others of this type. One such facility would be a machine gun and cannon range or for small arms fire such as rifles – as such I will interchange the way in which I describe this area in this blog post.

The machine gun and cannon range is listed as building type 147/41 on the Air Ministry airfield maps. These areas tended to be accessible via a path or track.

Firing ranges like this should not be confused with shooting-in butts for the airplanes which I’ve covered before at RAF Beaulieu in some detail.

Like the other A class airfields of World War 2, RAF Beaulieu did have one, and it’s clearly shown on the map of the airfield created in 1945. I’ve created a cut out portion below, with the map key overlaid.

Looking at those plans, you can see they show the small arms range as building 40. It’s made up of a building to shoot from from, then a brick wall enclosure to fire into (which would contain sand), and then another building behind – possibly being a Nissen hut being used as small arms store (SAA).

By also looking at aerial images from March 1944 and taking measurement on site, I believe that the machine gun and cannon range at RAF Beaulieu would have been a 25-yard small arms firing range.

You can see the aerial photo below where I’ve marked the area of the machine gun firing range. You can also see the track that leads down to it which was a common feature of this type.

How did RAF Beaulieu’s machine gun and rifle range work?

The men would walk down the path to the first building where could stand to then practice their rifle and/or machine gun shooting.

Based off the 1945 site plan, plus the aerial photography above, I can take a leap of faith that it could have looked very similar to the mock-up shown below.

They would shoot down the range into the brick enclosure (known as a butt) which probably had sand piled up into it. The sand was used to slow down the bullets and stop them from bouncing off the wall and causing danger.

There appears the possibility of a structure behind the butt, which might have been a temporary brick building or possibly a Nissen hut. I can’t say for certain, but if it was there, it could be the SAA (small arm store) as I mentioned in the intro.

When you’re out on the heathland today, you walk down a gradient to reach it, and it ends just before a marshy area with a pond.

There’s not a huge amount of evidence left of what one was, but I have managed to capture a few images of the remains which you can see below.

This remaining brickwork in the earth at I show above “could” be the remains of the brick wall enclosure with the sand in that the airmen would shoot into.

Here’s another view on it from a different angle.

There is also evidence of bullet fragments scattered on and around the bricks. I don’t know a lot about bullets, but I have been told that these could look like fragments from .303 rifle bullets.

You can see some of those bullet fragments below where I arranged them into the brickwork for a photo – it looked like someone had done similar before me too.

I also found other evidence of what could be a drainage hole a bit further up the hill at the point where the building the men would shoot from was. You can see that below, and how the hole has been filled with broken bricks from when the airfield was dismantled.

So, what would it have looked like in reality?

Unfortunately, I can’t find any historical photos of Beaulieu’s WW2 airfield rifle range, other than the aerial image shown higher up the page.

However, given what we know, and the evidence presented, I can make a decent enough stab at what the machine gun range at Beaulieu might have looked like during World War 2.

Here is a photo of the remains of a type 147/41 machine gun airfield range taken in 2009 on the RAF Gamston airfield in Nottinghamshire. The photo is courtesy of Richard Flagg who documents airfields around the UK on his website, UK Airfields.

You can clearly see the building facing the range which is where the airmen would fire rifles and machine guns from. The brick enclosure still exists, and the sand piled up now has vegetation growth on it.

I also found a recent satellite image from RAF Faldingworth in Lincolnshire on Google Maps. Whilst it doesn’t have a building behind the butt, and very little remains of a shooting position, you can see the enclosure that the bullets would have been fired into.

I believe the two images shown above could offer a decent representation of what the RAF Beaulieu airfield’s machine gun and cannon range might have looked like.

And… as a side note: When you walk around Beaulieu Airfield, particularly off the perimeter track onto the heath where this range exists, you will start to see broken pieces of red brick.

When I see bricks like this, I often wonder if each one of those bricks could have an interesting story to tell.

And there’s a good reason why.

In WW2, bricks were brought from the homes bombed in the Southampton Blitz. The bricks were then used to build up the paths and roads for the New Forest airfields where fighters and bombers left from.

Post-war, the airfields like Beaulieu were destroyed, and bricks recycled again for construction projects in Hampshire.

So, next time you see a random brick in the RAF Beaulieu, it could be from the Blitz, or might be one that was left behind from a dismantled airfield building.