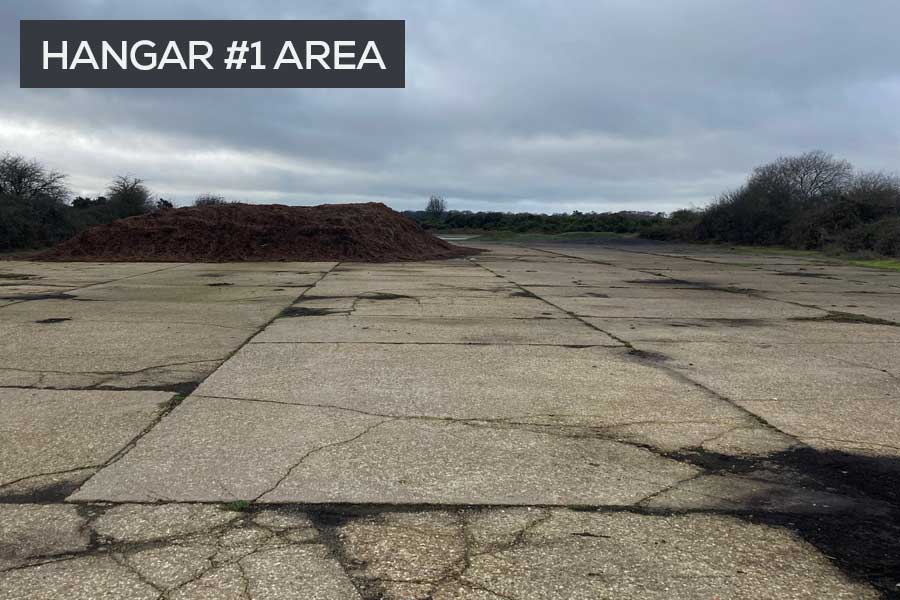 There were a number of hangars on the Beaulieu airfield during WW2, and the area with the most evident is the site where hangar 1 would have been. This is a position to the north of the airfield just up from where the control tower would have been situated off the perimeter track.

When you walk there today, you will see a large concrete area, which is currently being used to store cut and shredded bracken (December 2020). That’s what those large mounds of compost are.

According to the 1945 map of the airfield, this area housed an “aircraft shed”, which was Type 2. This means it was likely a T2 hangar from World War 2. There are some examples still standing today at other old airfield sites around the UK (see an example photo further down).

Having looked a photographic evidence of what RAF Beaulieu site looked like from the air in 1946, and comparing that to photos of existing T2 hangars, I’m confident this is what would have been here.

Here’s an aerial photo of the hangar just up from the control tower.

If you compare that aerial photo to what an existing Type 2, or T2 hangar looks like on a different wartime airfield, you will notice that pitched roof.

The T2 hangar photos above is not RAF Beaulieu, but is a hangar on the RAF Desborough airfield the still exists from the Second World War. Noticed the pitched roof, similar to the aerial photo of Beaulieu.

You can see the scale of this hanger at Beaulieu by looking at this aerial photo below from the days when the AFEE (Airborne Forces Experimental Establishment) were stationed at the airfield. The AFEE came to Beaulieu at the end of the war up until 1950, and were testing helicopters like the German Drache here.

The Airfields of Britain Conservation Trust describe T2 hangars as being:

“These metal hangars became the standard temporary hangar for the RAF during the Second World War and over 900 were built after a development period of two years. Examples survive around Britain, such as at Desborough in Northamptonshire.”

A fellow researcher of airfields has created flight simulator images of the hangar area at RAF Beaulieu, and believes this site would have looked something like the image below.

He also thinks it would have resembled a Type 2, or T2 hangar as I do.

If you walk the perimeter, you will reach the concrete of the hangar area, and can then cross the track onto the heath to find the location of the control tower and pundit code.

Why are large mounds of composted bracken stored here?

The reason these large piles of bracken are piled up here, is best described in this quote I found on a local news website.

“Bracken is a dominant plant that can create a tall, dense unbroken canopy. In the autumn, this canopy collapses forming a thick litter mat. Over a period of years, there’s a build-up of mat smothers other low growing plants, which is why it needs to be cleared. Once cut, bracken is transported to a storage site in the Forest where it is heaped to enable composting. The huge pile reaches minimum temperatures of around 60C and the heap is regularly turned (2-3 times a year) water is also added to aid this process.”

Given what we see in the hangar area of RAF Beaulieu airfield, this must be the central storage site in the New Forest that is being spoken of above.

One can assume that the bracken piles are replaced each year. The bracken is sold off to places like garden centres and nurseries who can use it as a soil conditioner.

Post-war use of the Beaulieu airfield hangars

Post-war, the site of RAF Beaulieu was used by the Airborne Forces Experimental Establishment (AFEE) after the US Air Force moved out. The AFEE would have used the hangar in this area too, up until they closed the operations in 1950.

The AFEE activities included the specialist training of pilots for helicopters and gliders. It’s not a stretch of the imagination to consider that the hangar at RAF Beaulieu would have been used to store helicopters and other experimental aircraft.

In Robert Coles’ book, “History of Beaulieu Airfield”, he also references how the hangars would have been used during the post-World War 2 period.

“During the rehabilitation period the airfield was used for various miscellaneous activities such as the demonstration by the Ford Motor company of 13 vehicles for tests in 1956. A Civil Defence exercise was held using the buildings as sites for rescuing bombed civilians. The hangars served as cookhouses.”

Robert Coles researched much of his book by talking to locals in the Beaulieu, East Boldre, and Pilley areas, so I imagine the aspect he refers to here are from the memories of local people.

Civil Defence training was a voluntary activity that ran up until 1968. It was in response to the fear of the Cold War, with training exercises conducted in the UK to help prepare for the event of a nuclear strike.

As you will see now if you visit, the steel structure of the hangar is long gone.

How long the concrete flooring survives before succumbing to nature is anybody’s guess.