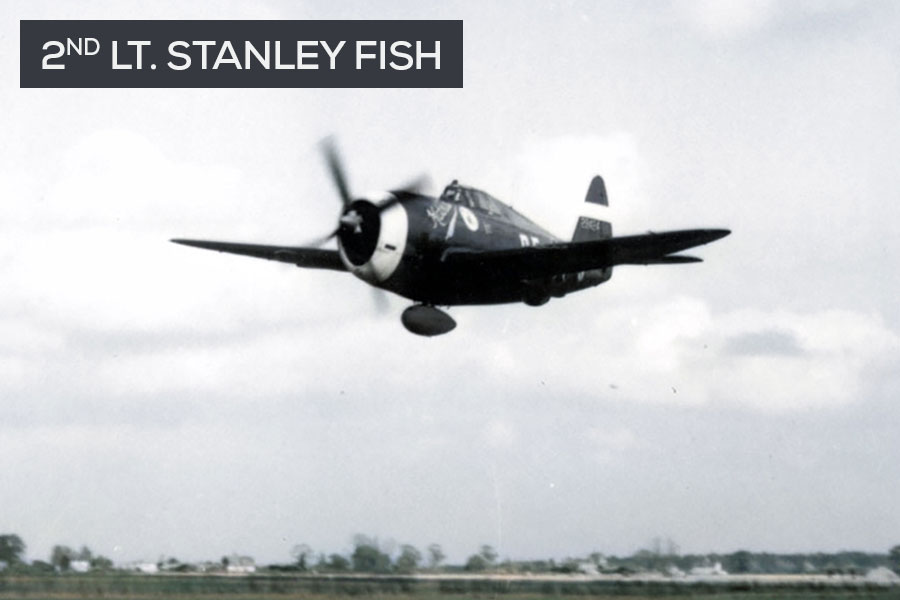 This article reports the death of 2nd Lt. Stanley Eugene Fish who took off from Beaulieu Airfield, known as USAAF Station 408 at the time. If you are a member of his family and would like me to edit or remove this report, please do contact me.

The reports on this website are intended to keep the memories alive of the brave men and women who served at Beaulieu both during the war and in the immediate post-war period. Some gave their life in the process.

We don’t want these people to be forgotten. Any content on here has been written with the best intentions, and with the utmost respect of those who gave their lives.

On the 7th of April 1944, a USAAF P-47 Thunderbolt with number 42-22454, took off from the USAAF Station 408 base in the New Forest, Hampshire. The airfield had previously been known as RAF Beaulieu but was now under the temporary control of the United States Army Air Force.

Piloted by the USAAF pilot 2nd Lt Stanley Eugene Fish, the take-off occurred at 1614. There was 3 hours’ worth of fuel on the P-47 Thunderbolt, and the flight was intended to be a local “test hop” to test the aircraft.

After taking off from Beaulieu, witnesses report seeing 2nd Lt. Fish circling the airfield for a few minutes before disappearing off into the haze to perform the test flight.

Two hours later, the Beaulieu Airfield control tower attempted to contact 2nd Lt. Fish over radio but received no answer. The staff at Station Flying Control concluded that he must be outside of radio range, not listening, or flying too low to receive the call.

By 1915 hours that evening, 2nd Lt. Fish had failed to return to Beaulieu Airfield so the Flying Control Officer on duty initiated an overdue action on the P-47 aircraft. This also involved contacting the RAF and other airfields in the vicinity such as Christchurch, Holmsley South, and Ibsley for any information, but no positive reports came back.

Later that evening the sad news came in that 2nd Lt. Fish’s aircraft had crashed and exploded near Allington village. The crash site was just north of Salisbury in Wiltshire, around 35 miles from Beaulieu. The crash time was estimated to be at 1830 and had resulted in explosion which killed the pilot instantly. The P-47 was completely destroyed with the wreckage of the aircraft spread over 300 yards.

The USAAF accident report from the time concluded that 2nd Lt. Fish had become lost in bad weather shortly after leaving Beaulieu Airfield.

There were no witnesses to the crash so the Accident Investigating Committee decided that he must have attempted to come down through overcast low clouds. Due to the poor visibility and disorientation he was unable to pull up in time, before crashing into a field at speed.

After the crash, the USAAF put recommendations in place for pilots taking off from Beaulieu Airfield. They were told they had to always check weather conditions before leaving, and this had to be vigorously enforced. It was also recommended that that “test hops” were only allowed to take place in the immediate vicinity of the airfield.

Photos of the P-47 crash remains

In May of 2021 I was passed partial remains of 2nd Lt. Fish’s crashed P-47 in order that his memory could be properly documented on this website. I was in two minds as to whether the pieces should be retained or not as it raises ethical questions.

However, the parts you see here were discovered by chance scattered at the crash site which was already known by the authorities. The parts were not excavated from the ground, and the finder did not return to dig. I was also not aware of 2nd Lt. Fish before seeing these, so it has helped me research and tell his story a little so his name is better known.

I have promised the finder of these aircraft parts that I will explore any options where they might be of interest, perhaps at a local museum to teach people about the history of our local airfield.

Once a decision has been made on where the pieces will go, I will update this post.

The find has been reported via the correct channels to the Ministry of Defence who are aware that they are in my possession as a custodian for the time being.

How to report on crashed aircraft parts

Should you ever find remains of a crashed aircraft, please be aware that there are proper channels you need to go down in order to remain legal. Failure to do so could mean you are prosecuted under the Protection of Military Remains Act of 1986.

For government guidance, please consult this guide to aviation archaeology, excavation of crash sites, and the ownership of recovered items.

Also please be aware that metal detecting is prohibited in the New Forest without permission. Whilst the parts of this P-47 were not found in the New Forest, many other authorities and councils have similar policies in place.

The bottom line is, do not deliberately seek to find crash sites and dig for aircraft parts in the New Forest. If you are in any doubt, please contact the archaeology team at the New Forest National Park Authority (NFNPA) for advice.

Please note: The image in the header of this article is a public domain photo of a P-47 Thunderbolt similar to the one flown by 2nd Lt. Fish. It does not depict 2nd Lt. Fish.