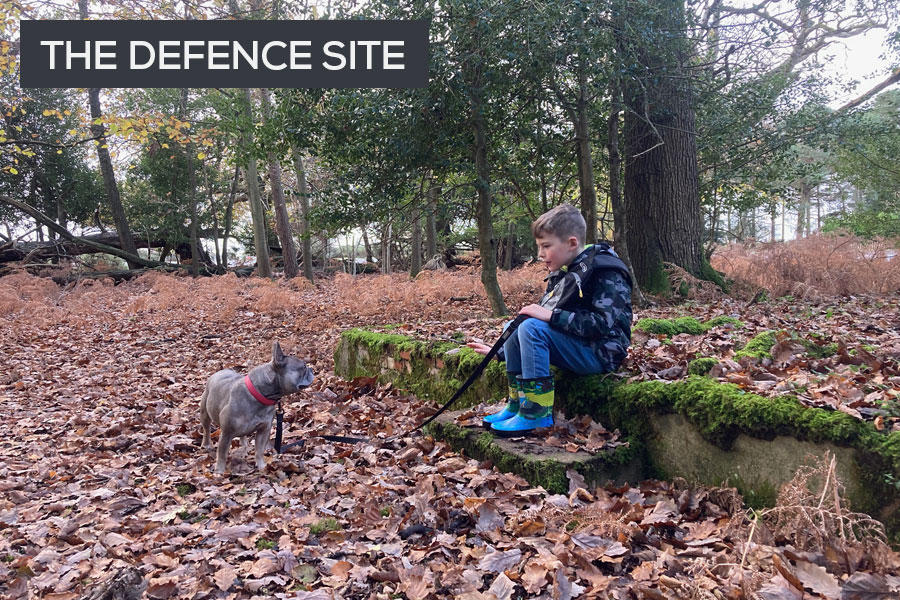 RAF Beaulieu had an accommodation area called the Defence Site. It was located in what we know as Stockley Inclosure, on the bend of the B3055 road, west of Hawkhill Inclosure’s bomb store site. There are still foundations and bricks visible in the location as of today (May 2021).

You can see the location of the Defence Site as highlighted on the 1943 plan of the dispersed sites for this New Forest WW2 airfield.

Defending a WW2 airfield from attack

All WW2 airfields in the UK needed to be defended. This became more important as Germany advanced through Europe northwards, with the invasion of Britain becoming a realistic threat.

However, airfields are not that easy to defend given the large expanse of land that they cover. As a result, various defensive positions and strategies were put in place.

This could include items such as anti-glider trenches, pillboxes, AA guns, machine gun posts, and Battle HQs, all of which would have been seen at Beaulieu Airfield.

The men tasked with defending the UK airfields were in the RAF Regiment, formed in 1942. They would have had to have been based on the airfield, ready to deploy at a moment’s notice – hence the Defence Site.

Despite the name, the Defence Site at RAF Beaulieu was for accommodation.

It was not an area where you would find defensive positions such as AA guns and pillboxes, but instead Nissen Huts for barracks, toilets, and washrooms.

“In February 1942, much to the relief of the Army, the R.A.F. Regiment was formed and given sole responsibility for defending all R.A.F. installations on the country, thus releasing the Royal Artillery gunners from having to man airfield AA defences. The Regiment personnel had their own messing and accommodation facilities on separate ‘Defence Sites’. These sites rarely comprised more than Nissen or Maycrete hutting, so don’t be led into thinking that fortifications can be found on them.“

The image below is a section taken from the Air Ministry’s 1945 layout plan of RAF Beaulieu. I have placed the key inset showing the Defence Site buildings.

Here’s a full list typed out of what would have been present on the RAF Beaulieu Defence Site according to the Air Ministry plan of the airfield from 1945. The numbers in brackets are Air Ministry building numbers, all of which were built to a set specification across all British airfields of the era.

In amongst those buildings are 17 Nissen huts which would have provided the accommodation. Based on that, I estimate that between 200 and 300 personnel would have lived in the Defence Site area.

There is still evidence of the living accommodation on the Defence Site at Beaulieu Airfield with the brick foundations of the Nissen Huts still on display. To see them yourself, park in Hawkhill Inclosure car park, then walk down towards Stockley Inclosure.

When you walk onto the wooded area of the site, it’s fascinating to see how closely all these Nissen huts would have been set together. The photos below were taken in November of 2020.

It’s very possible that camouflage netting would have been stretched over the top of them to make them less obvious from the air. That was also helped by the huts being in wooded areas.

Here are more photos I took when I re-visited the site in May 2021.

You can see evidence of more brick bases for the other buildings too.

As the threat of German invasion receded, it’s possible the accommodation here was for airmen of any type, not just those on defensive duties. By October of 1944, airfield defensive works in the UK had been brought to a halt.

In the immediate post-war period, I don’t believe the Defence Site huts here were used by the military from 1945 onwards. I base that assumption on the fact this area is not listed in Alan Brown’s illustrations and notes he made of his time serving in the AFEE from 1946 to 1950.

It could be that the living area in Stockley Inclosure was instead used for civilian accommodation in after the war. A lot of the Beaulieu Airfield accommodation areas were used in this way due to a housing shortage in the UK, here’s a great example.

The alternative theory is that they were pulled down immediately after the war. In May 2021 I spoke to the daughter of Jack Humby (read his memories). She was a young girl post-war, living in Stockley Cottage opposite the Defence Site and she cannot remembers huts being there, just the pit and foundations.

Video of the Defence Site area from December 2020

In the video below you see me visit the Defence Site’s Nissen hut foundations. It’s the first few minutes of the video. You can replicate my walk yourself as there’s a map of directions included in the video. For more videos like this, subscribe on YouTube.