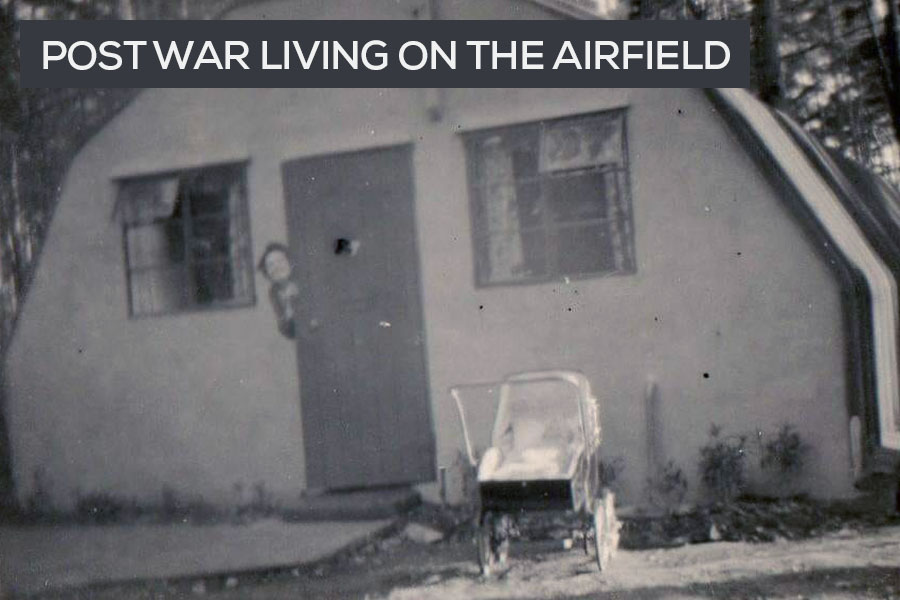 During World War 2, many of the larger UK airfields had effectively operated as small towns. The Beaulieu Airfield in Hampshire is a great example, as it had the infrastructure to serve over 2,000 personnel. This included accommodation, stores, a gym, and even a building used as a rudimentary cinema and for concerts.

Whilst the buildings had been intended to be temporary, they remained for number of years after the war. The accommodation left would soon be put to good use due to a shortage of housing once peace was declared.

Not only had bombing destroyed thousands of homes, but there was also a post-war baby boom, lack of materials and funding for new builds, plus men returning from the war with no homes to come back to.

With buildings still left at RAF Beaulieu and other New Forest airfields, the council were able to offer accommodation in the Nissen and Handcraft huts to local families in desperate need of a home.

One such family was that of a man called William Phillips. William had served in the Hampshire Regiment from 1942 until he was de-mobbed in 1947.

In 1948, William, his wife Mary, and baby Edwina moved into a Handcraft Hut on Site 6, paying 8 shillings a week in rent.

During wartime, Site 6 had been home to over 20 huts for sergeant and officer quarters as well as airmen barracks. There were also six latrines, and one washing room as separate buildings.

Today, the Site 6 huts no longer exist. However, they would have stood to the north west of Roundhill Campsite, near the campsite entrance, and adjacent to the road that runs from Hatchet Pond to Brockenhurst.

This is William’s story.

Our daughter Edwina was born on July 19th, 1948. We went through loads of names until I came up with the name Edwina which my wife Mary liked, and so it was.

We applied to join the council housing list, and as we were living at Warren Cottage, we came under the New Forest council.

The RAF were leaving Beaulieu Airfield and the council were taking over some huts and converting them for civilian use. We were offered one; Hut 7, Site 6, with the rent being about 8 shillings a week.

We accepted of course.

It was good to be living on your own as a family, but it was really hard going in those days. No fridge, no washing machine, only a coal range for cooking.

There were quite a few families living in the site. All young, mainly ex-service people.

I did not hear anyone complaining of the hardship of living in a hut. They were probably thinking how lucky they were in surviving the war.

I had to find the best way to get to work at Ampress, near Lymington. I had to cut across the airfield on my bicycle, go down through Dilton farm, down past Boldre church, and on to Boldre bridge and along to Ampress.

Quite an interesting journey. Sometimes it was in the dark, and I was getting wet through as it rained. Meanwhile, Mary was working hard making a home for the family.

Our toilet was in a block, and I didn’t like that arrangement too much.

Our hut was on the edge of the site. The accommodation in the huts were two bedrooms and a living room combined with the kitchen.

While I was working night shifts, Mary was really brave being all on her own with a young baby. Mary never complained, just got on with it. These modern times, the girls would not put up with it. They would have left and gone home to mum in double quick time.

We got on and did our best to make a good home.

Buying things? There was not much you could buy. Most things were on ration in short supply.

The accommodation was basic, 2 bedrooms, living room and kitchen all in one. The only heating was an old fashioned coal range, not an ideal situation but we were happy to be together after getting de-mobbed from the army.

The floor was concrete and did not have any covering. We managed to buy some roofing felt which we used as lino and then painted it with some special floor paint. It did the job and was better than nothing.

We had some basic furniture which we bought when we were at Warren Cottage. It comprised of bedroom furniture, dining table and chairs, sideboard, and divan.

We managed to acquire a primus stove which Mary used to boil up Edwina’s nappies.

Some amusing occasions include the forest ponies poking their heads through the open windows, the smell of the stinkhorn mushrooms which used to give off a terrible smell, like rotten meat.

I planted some wallflowers in the front of the hut, and a cow ate the lot.

I used to sweep the chimney with a branch off a holly bush and cord tied on, and then pull it through the 4-inch chimney. It came apart above the coal range and there was soot all over the place.

We were well isolated at the huts. No telephones. Bicycles and Shank’s pony were the only transport.

Our groceries came from the Purkiss shop in Brockenhurst. A man used to call and take our order for the week. Food was in short supply as it was still rationed, and the delivery was once a week.

Mary told me there was another baby on the way, so we had to prepare for the new addition to the family. Mary booked up to go to the Fenwick Hospital at Lyndhurst.

We thought we had better get a bigger pram. We had seen an advert in the local paper. A twin pram for sale in Hinton Admiral. I decided I would go and investigate.

I took the train from Brockenhurst to Hinton Admiral, had a look at it. It was a coach-built pram with two hoods, all in good condition. So, I bought it. It’s probably a collector’s item these days.

I put the pram on the train and took it to Brockenhurst, and then pushed it all the way up to Hut 7 on Site 6.

The new baby was due. Mary went to Fenwick Hospital and a baby boy was born on the 1st of August 1949. Mary was in the hospital for 2 weeks or more, as she had a difficult time.

We decided on a name. Mary liked the name Nigel which was OK with me. I visited Mary most evenings. There was a nice pub in the road up to the hospital, the Waterloo Arms and I used to call in there occasionally.

Eventually Mary and Nigel came home. The doctor came to visit Mary. You could not get a doctor to come out and see you these days. As time went by, Mary recovered.

Mary used to go down to Brockenhurst to do some shopping. She must have found it hard work pushing the twin pram up Irons Hill to Site 6. I think she deserved a medal. It was really hard times.

There was no military activity going on while we lived there, although the guardroom was still in operation including guard dogs. They came after me once as I was on my way to work and crossing a part of the airfield.

No harm done they were friendly guard dogs!

Some time that year, 1949, we had a letter from the council. The Forestry Commission wanted that bit of forest returned to them.

The council moved us all down to Setley Camp. Number 8, Oak Road became our new residence. It was better than living at Site 6, Hut 7 on Beaulieu Airfield.

Now we had a bus to Southampton.

I would like to thank William Phillips, his son Nigel, and family for letting me publicly publish very personal memories.

I feel honoured that he has let me share this with a wider audience, and am sure anybody else who reads this will feel privileged to be able to do so.