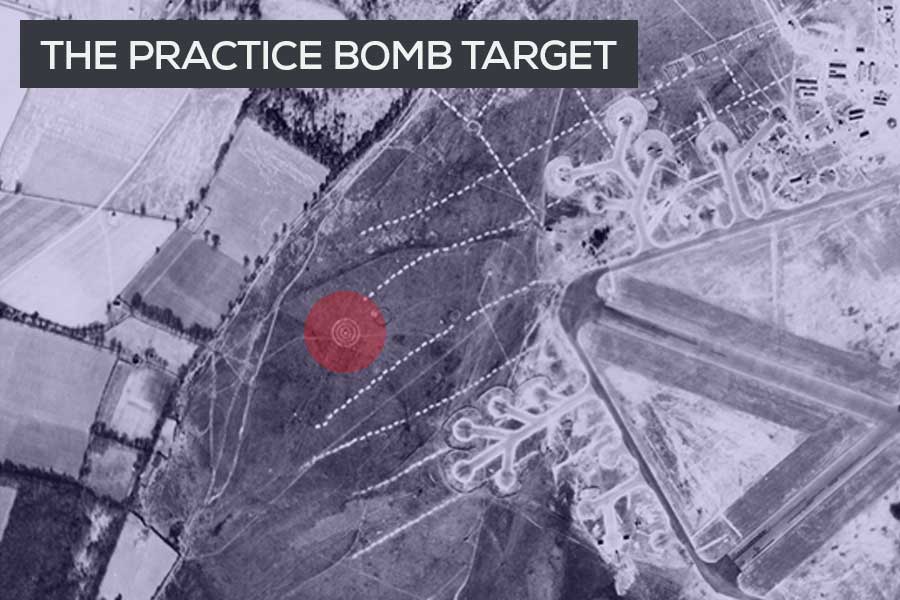 One aspect of RAF Beaulieu’s history without many records of, is what appears to be evidence and remains of a practice bombing target to the west of the airfield.

It’s in a relatively inaccessible place, being away from the perimeter track that most people walk on. During the winter months it also becomes extremely waterlogged as you will see in my video lower down the page.

However, if you look at Google satellite imagery taken down the years, it’s very clear that the practice target was scored into the heathland near the RAF Beaulieu airfield. You can just about still make it out today from the air.

I took a walk out to the practice bomb target area recently. You can see what I found in the video below.

There was still evidence of the chalking of the concentric circles on the heath, with the circles appearing to have been scored down into ground about 1 to 2 inches.

If you watch the video above, you will see there’s a lot of assumptions and suppositions in there. That’s because I am not an expert on this aspect of WW2 airfields.

However, I did manage to track down someone who has a lot of knowledge about these aspects; Peter Kirk. Peter has been kind enough to collaborate with me over email after reviewing my images, and has helped me so much with this particular piece of research.

In fact, most of what you are now about to read next is thanks to Peter Kirk’s own remote investigations, without being able to visit the site.

Lower down the page I will hand the reins over to him, and let him explain what he believes is the background to the RAF Beaulieu practice bombing target based on questions I asked him.

Is this practice bombing range similar to ones found on or near other World War 2 airfields?

Although strictly this should be classed as an airfield bombing range as it was outside the landing area it didn’t quite fit into that category.

The target at RAF Beaulieu is clearly visible on aerial photographs from March and April of 1944 and features three concentric rings of 30, 60 and 90 feet out from the centre point. This is smaller than normal targets and is similar to the later Fleet Air Arm ORS type targets.

I originally thought it was installed by a unit during the build up to the D-Day landings. However, I have since revised those thoughts, as you can see lower down the page.

The target was not visible on earlier aerial photos and had faded by the 1946 ones were taken but it is still visible today, probably due to the alien chalk that is not native to the New Forest, which was used to make the white lines.

What bombs were dropped on the target range during wartime?

We don’t know about RAF Beaulieu for sure, we can only assume things based on other airfields.

That means any bombs dropped in practice would like be small practice smoke bombs between 8.5 pounds and possibly as large as 25 pounds later in the war.

However if the units dropping for practice were the USAAF, they could have even been 100 pound versions. The bombs all carried a small “burster” charge to break the practice bomb open to release titanium tetrachloride into the atmosphere and the moist air would react with the chemicals to make white smoke.

There were another type of bomb, called a breakup bomb which was made of Bakelite and had no burster charge and merely shattered on impact. This was normally used on fragile targets which would be quickly damaged by steel version.

They were also used on airfield targets where tyres would be damaged by metal fragments. Later in the war an asbestos cement bomb was developed which turned to powder on impact.

Scoring of practice was key to the use of the majority of ranges like this. Two quadrants mounted in quadrant shelters were normally used to spot the smoke and measure the angles off each quadrant to enable the smoke to be plotted on a range chart. The chart was pre-drawn with all the angles so that the intersection gave the location of the bomb.

However I doubt that happened at Beaulieu. I suspect the bombing was filmed and was for dive bombing. The rings of the target would give an accurate measurement of accuracy- once the film was developed.

What do you think the other circle above the practice target could be?

Adjacent and just north from the chalked practice bombing target is what appears to be another circle and this was also visible on a April 1944 Luftwaffe aerial shot (cannot be shared here due to permission issues).

Other circles in the area have been identified and marked as Bronze Age tumuli (aka barrows or burial grounds) on OS maps going back to the 19th Century, but this circle only appears on post war maps.

However, based on what you found in your video, I think it is more likely that it is a barrow, and is perhaps just a happy coincidence that it’s so close to RAF Beaulieu’s target.

Perhaps they did actually use the barrow for practice before making a more visible chalk target just below it to the south.

Please Note: I have since had it confirmed that the second circle above the practice target is a Bronze Age barrow and wasn’t WW2 era.

When do you think the practice bombing target at RAF Beaulieu was created?

I have examined aerial views of the target area on Beaulieu airfield from wartime and might need to revise my findings on closer look at some point. However, I can tell you the following.

Post 1946, the target chalk lines start to degrade and disappear.

Which air forces would have been using the practice target?

Given that I can see the bombing target was there from at least January 1943, that puts it into the Coastal Command era, possibly the 224 Squadron. However looking at their records there is not mention of a target near the airfield, but that is not say they weren’t responsible as most training is not recorded.

What I did find though was operational records from 263 Squadron. Their records show the following entry:

A/F stands for airfield. They were still at Beaulieu and equipped with Typhoons at the time and just about to move out and be replaced by USAAF P-47 Thunderbolts.

You can see a cut out of the entry below:

I will look at the two Typhoon squadrons that were based there in early 1944, just in case they made use of it too. Daily records of the USAAF units are not available as far as I know so we may never know if they used it.

As Coastal Command may be the culprits it is possible it was used for depth charge practice using practice bombs. This would have been at low level, sometimes down to 50 feet. All this is just conjecture.

I did also look at 224 Squadron earlier but no luck. It seems some of their appendices were not saved and these may have held some information, although from experience this is unlikely.

The archives may yield something in the Coastal Command Group records but from past experience you have to go through 100 pages to get one page with information about ranges.

Please Note: As and when more research or evidence comes to light, this resource will be updated. Many thanks to Peter Kirk.

Since publishing this blog post I spoke to a respected historian who had the belief the chalk target was post-WW2 and possibly used by the Airborne Forces Experiment Establishment (AFEE) from 1946 onwards.

The belief was that it would have been used for target practice of gear and possibly people on parachutes.

However, the historian has since revised this opinion since seeing the evidence presented here. He was also kind enough to confirm that what we thought was a Stone Age barrow, is indeed just that.

It’s also worth mentioning that the AFEE drop zones were not on this location, instead being in the centre of the airfield, and over the B3054 road on the site of the WW1 era airfield at East Boldre.