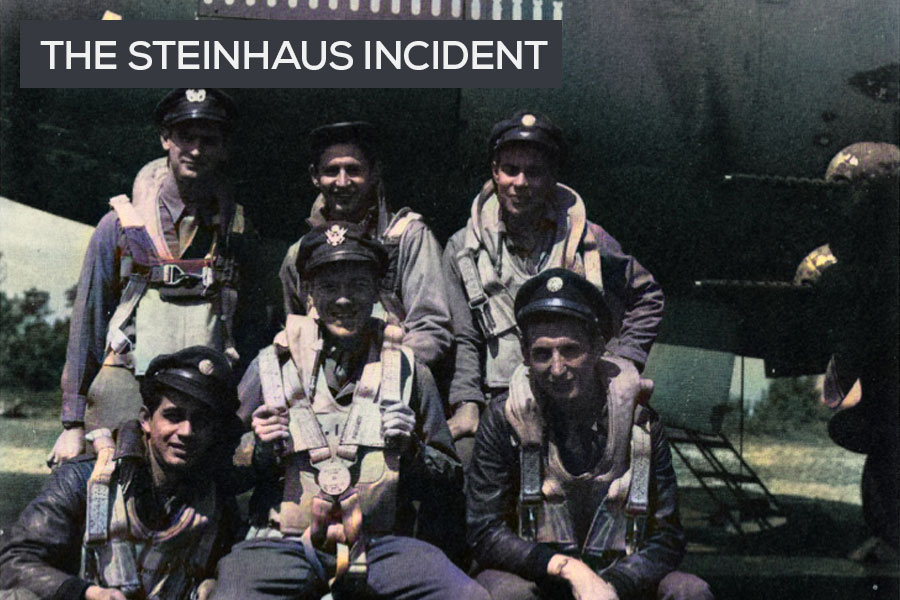 This article reports the death of Lt. Robert C. Steinhaus at Beaulieu Airfield which was known as USAAF Station 408 at the time. If you are a member of his family and would like me to edit or remove this report, please do contact me.

The reports on this website are intended to keep the memories alive of the brave men and women who served at Beaulieu both during the war and in the immediate post-war period. Some gave their life in the process.

We don’t want these people to be forgotten. Any content on here has been written with the best intentions, and with the utmost respect of those who gave their lives.

On the 2nd of August 1944, the USAAF 323rd Bomb Group were tasked in supporting Allied forces advancing through France. The men of the 323rd were given a mission to fly from Beaulieu Airfield (USAAF Station 408) in order to attack German ammunition and fuel supplies at Le Lude in France.

The bombing raid was a reasonable success, with no losses of any of the B-26 Marauders and crew whilst over France. However, before the bombers took off from Beaulieu, the mission was to be marked by tragedy.

As Lt. Steinhaus and his crew prepared to taxi their B-26 Marauder out of the hardstanding dispersal area, an accident happened that nobody could ever have foreseen. With both engines running, the plane started to edge out when a loaded flare gun fell from a rack and down onto the cabin floor behind the pilot’s seat.

As the flare gun struck the floor it fired, with the flare hitting a hydraulic line. The strike severed the hydraulic line containing fluid that was kept under 1,000 pounds of pressure. This resulted in a catastrophic explosion and fire in the cockpit.

Lt. Steinhaus was killed by the resulting flames. The 5 remaining crew members managed to escape and survive, with the co-pilot, Lt. Charles B. Hanger suffering with 2nd and 3rd degree burns.

The bravery of T/Sgt Henderson avoids a bigger tragedy

The accident could have been so much worse if it wasn’t for the quick thinking of T/Sgt Walter H. Henderson. The Steinhaus B-26 was loaded with 2,000 pounds of bombs and fuel. There were also bombs arranged and stacked on the surrounding hardstand area.

If the fire had progressed from the cockpit to reach those onboard bombs and fuel, there was a real risk of a larger explosion and further fatalities taking place.

With little regard for his own safety, T/Sgt Henderson ran to the burning plane, reached into the fire, and switched the engines off. Henderson received burns himself, but potentially saved many lives from a far greater tragedy.

“I shared the hardstand with the aircraft piloted by Lt. Steinhaus. It was engine start time, and with the left engine running, I turned to start the right engine. As I did, Steinhaus’ aircraft erupted in flames.”

“The top access hatch was open, and fire roared out of the hole like a torch. I saw someone trying to get out through the top hatch, but he seemed to be stuck. Flames shot upward around him, and I had to conclude that he was a goner.”

“I saw T/Sgt Henderson running to the nose well. Mashing down on the mic, I yelled for a fire truck. At the same time, I engaged the starter on the right engine, and it caught.”

“With the fire raging in Steinhaus’ aircraft, I expected that his bombs would cook off in minutes with severe secondary explosions as we were literally surrounded by ordnance on the hardstand.”

“With number two running, I yelled for the chocks to be pulled and, as the fire truck raced up, we moved our aircraft out to the taxi strip. Emergency crews now on the scene, we went on to complete the mission.”

“On return, I learned that Lt. Steinhaus had died. But we were thankful that the remainder of his aircrew was still alive and that none of the bombs had gone off.”

Roy Bozych, 323rd Bomb Group historian at 323bg.org, further researched the accident, and emailed me the following comments about the accident, log reports, and the plane involved.

“The incident occurred on August 2, 1944. But when you look at the loading lists for that day and mission you don’t see Lt. Steinhaus listed on any of them. The last mission flown by him that I could find was July 30, 1944. I don’t know why he and his crew weren’t listed for the August 2nd mission. Maybe rather marking the loading list as “No Sortie” they just left him off out of respect. Just a guess on my part.”

With regards to the B-26 bomber plane that the accident occurred in, Roy says it was scrapped after the fatal accident at Beaulieu:

Roy Bozych has also helped research with the non-fatal crash landings of the 323rd Bomb Group on Beaulieu Airfield. You can read accounts of those here.

Robert C. Steinhaus was born on August the 20th in 1921 and joined the air force in July of 1942. He was trained in Texas, and in April 1944 was transferred to England as pilot of a B-26 Marauder bomber.

He was very interested in music, playing with various musical organizations while attending Central High school. After his graduation he was a trumpet player in various bands and travelled throughout the country. He was with Tommy Wendell’s orchestra, in Texas for a time and then with Johnny Randolph’s orchestra of Louisiana.

Robert was 22 years old when he died.