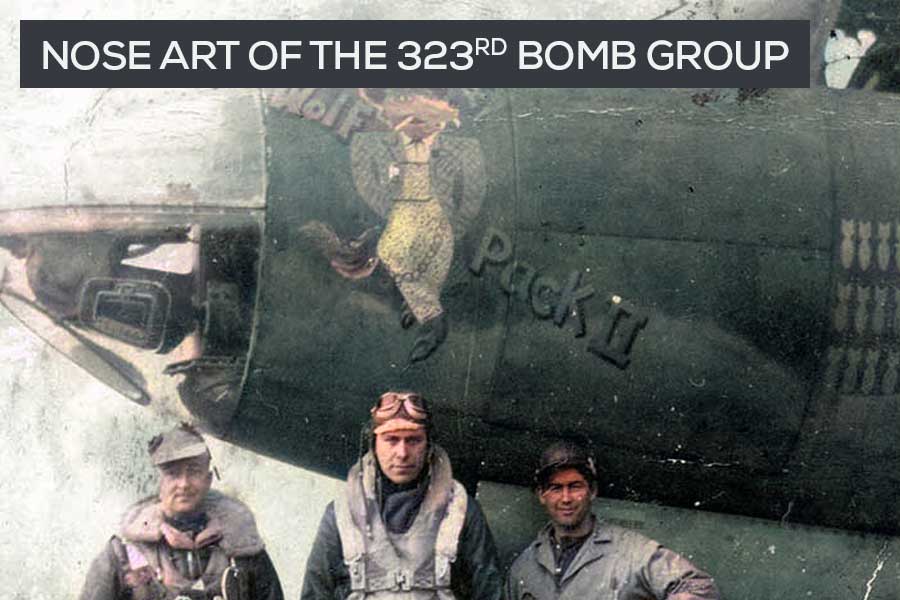 On the 21st of July 1944, the 323rd Bomb Group arrived at Beaulieu Airfield, replacing their USAAF colleagues, 365th Fighter Group. Whilst under American control, the airfield was known as USAAF Station 408, and for a short time was to be the airmen’s home until August.

The B-26 bombers of the 323rd were given unique names by their crew as well as distinctive nose art designs on the front fuselages. You can see the names they gave some of the planes at Beaulieu Airfield (USAAF Station 408) below.

Nose art of the 323rd Bomb Group flying from Beaulieu

Airplane nose art came to prominence during WW2, becoming very popular with the US airman. Whilst it started out for practical reasons to help identifying friendly units, nose art design evolved to express the individuality often constrained by the uniformity of the military.

The nose art design and names of the B-26 Marauders seen below will have been painted to help evoke memories of home and peacetime life. They were also said to offer some kind of psychological protection against the stresses of war and the possibility of death.

According to the Wikipedia entry on WW2 airplane nose art, the appeal, in part, came from nose art not being officially approved, even when the regulations against it were not enforced. The USAAF commanders tolerated nose art in an effort to boost aircrew morale.

Here’s a selection of nose art from some of the 323rd Bomb Group that flew from Beaulieu Airfield during WW2.

All images are credited to the Imperial War Museum, USAAF, with some from the collection of Roy Bozych.