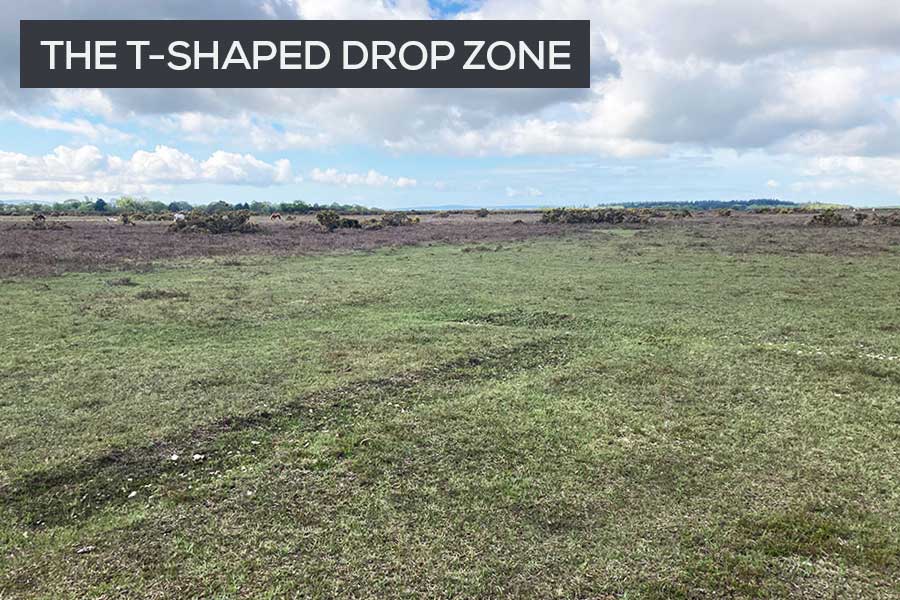 From 1945 to 1950, the Airborne Forces Experimental Establishment (AFEE) came to the RAF Beaulieu Airfield to start testing aircraft and parachute systems. Locals would have seen all sorts being dropped from planes and not just men. Even jeeps were dropped.

Whilst the AFEE was based on the site of the WW2 airfield, they also used the site of the WW1 airfield over the road at East Boldre as a drop zone (DZ). This was where they would aim for, before returning back to the main airfield to do it all over again.

In “Tales from the Crew Room” by Alan Brown, he describes what it was like aiming for the heathland at East Boldre which had been designated the DZ.

“The DZ, as it came up to meet us, was quite a shock, for unlike Weston-on-the Green, this one appeared to be half covered with clumps of yellow topped gorse bushes. You could roll up your parachute and ride the bicycle of the DZ, providing the spikes of the gorse bushes didn’t puncture the tyres.”

Alan Brown and his fellow parachutists were aiming for was a large capital T scored into the heathland as their DZ. They also used an old caravan at some point (but that’s a story for another day). You can see that T shape in one of Alan’s illustrations.

In 2021 it’s still possible to see the imprint of the capital T shape on the heathland at East Boldre which the AFEE parachute team would have used as a target.

It appears to have once had white stones in it, some of which are still there today. As an educated guess, I believe it was filled with white stone to make the T more visible from the air.

John Drodge, a local resident who grew up in the area has recollections of the drop zone. In May 2021 he told me the following:

“I remember the drop zone marker well in the 1950s as it was off to the left of the track we would cycle across to my Grans at East Boldre. It was marked out with small stones. Earlier it had been out of bounds when in use.”

You can see a clearer image on the East Boldre Village website: www.eastboldre.org/aeropostwar.html