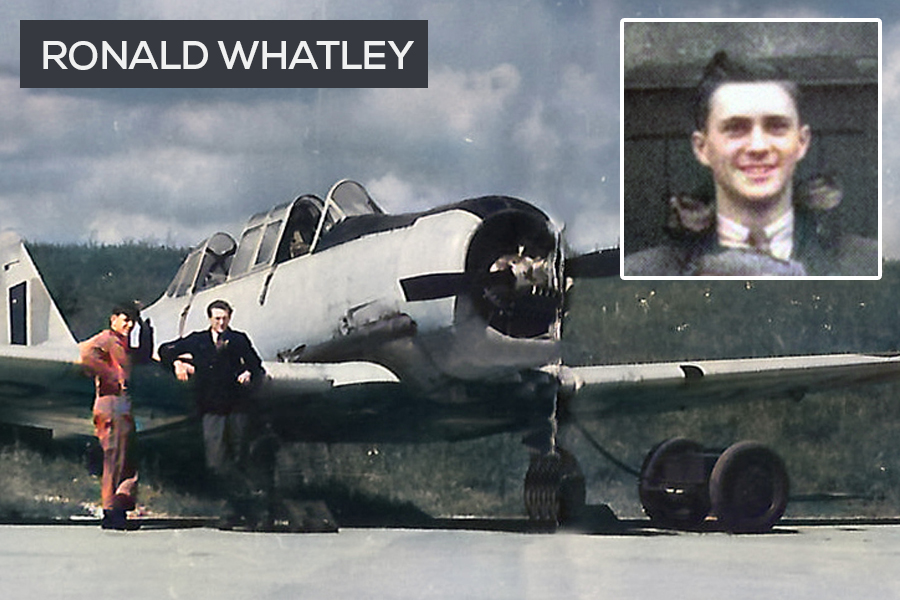 From 1945 to 1950 Beaulieu Airfield was home to the Airborne Forces Experimental Establishment (AFEE). Their role was to test new technology, aircraft, and parachuting methods. This included a captured German helicopter, trying new glider techniques, and even dropping jeeps onto the New Forest heathland from aeroplanes.

Each new test and technique needed to be documented by the photographic department based on the airfield. One of these AFEE photographers was a local man called Ronald Whatley. He served two stints at Beaulieu.

Tragically, Ron was killed on Thursday the 12th of June 1952 during a routine flight in a Harvard aircraft whilst on a job for the Ministry of Supply. The airplane crashed at Figheldean, just 4 miles from Boscombe Down where it had flown off from.

This is Ron’s story with contributions from his brother David. The family have also kindly donated photographs from the Ron Whatley album.

Ron was born on the 20th of June 1928 in Eling Lane, Totton. The property was a Swedish wooden house, now demolished, which was the yard that belonged to Burt Boulton and Haywood Ltd. Ron’s father was yard foreman for the company.

In 1941 Ron’s family moved to Culford Avenue in Rushington just before he turned 13. This was shortly after the road they were living at in Totton had been hit by Luftwaffe bombs, so meant a lucky escape for the Whatley family.

1943 saw Ron join the Air Training Corps with the 606 Squadron at Brockenhurst Grammar School. He was to be with the local ATC until May 1945. The ATC at Brockenhurst was led by Wing Commander Meredith and Ron’s younger brother David would later join too. However, when Ron died in the plane crash in 1952, their mother, understandably so, made David leave the ATC.

After his initial Beaulieu posting with the AFEE, Ron then spent a few years with the RAF at various bases including Farnborough and Gibraltar. It was at Farnborough that Ron attended the RAF’s School of Photography where he completed a 13-week course to become a photographer.

Ron’s new qualification and role meant he was eventually able to come back home to the New Forest area, posted to RAF Beaulieu again with the AFEE in April 1949. It would be here that Ron would spend nearly a year and half working for the photographic department until September 1950. The department was run by Flying Officer Pleasance. Bob Bird who I’ve written about before was also in the team with Ron.

Ron was also in attendance at the Beaulieu Air Show of September 1949 which is said to have attracted over 30,000 people. Below you can see the entry from Ron’s logbook about the Battle of Britain air show at Beaulieu that year, including what plane he was in to take photos – a Harvard (KF226).

Ron’s brother David would have been 12 at the time, and recalls being taken into the photographic department’s buildings to see the equipment Ron was using with the AFEE.

The photos and logbook that Ron left behind offer fascinating insight into his time on the airfield as it shows every flight he took over the New Forest heathland.

In one of Ron’s photos we see how Ron was witness to the AFEE dropping Jeeps from Dakota planes. That wasn’t too unusual, but what Ron managed to capture for posterity was how one of the Jeeps accidentally landed on the roof of an airfield building. You can see that photo from RAF Beaulieu below.

It wasn’t all work though, there was also downtime in the local area too. For example, sailing at the Calshot Sailing Club.

Ron was also to meet his future wife Betty in 1949. They met at an Empire Hall dance in Totton, going on to marry two years later.

Incidentally, one of Ron’s photos from this period shows Calshot and a captured German Blohm and Voss flying boat in the background. This was a BV 222 that had been captured at Sørreisa in Norway after the war. It was flown by Captain Eric “Winkle” Brown from Norway to the RAF station at Calshot in 1946 – where Ron took the photo below.

During his time at Beaulieu, Ron would also get to know Alan Brown, the AFEE parachute instructor who went on to later become a historian of the New Forest airfields.

Comparing the service logs of both Alan and Ron, it shows how they both flew in a Dakota to Lee on Solent on the 28th of August 1950. This trip saw Ron documenting Alan’s jumps over the water.

His time at Beaulieu was soon to come to an end though. In September 1950 the AFEE was disbanded and most of its equipment and personnel were transferred to the Aeroplane and Armament Experimental Establishment at RAF Boscombe Down.

Ron would leave RAF Beaulieu and his local home comforts for the Boscombe Down base.

This move would be the last posting of Ron’s career, as it was from here that tragedy would strike. The Western Mail reported the following about the crash of June 1952:

“Killed in the crash were RAF Flight Lieutenant I.K. Johnston and Ministry of Supply senior photographer Mr. Ronald John Whatley, who were in a Ministry of Supply Harvard aircraft. The aircraft crashed at Figheldean Range, four miles north of the Ministry’s establishment at Boscombe Down, Hants. The Harvard was on a routine flight from Boscombe Down.”

Ron’s young wife was pregnant at the time of his death. Ron never got to meet his son James.

Memories of Ron from his brother David

David Whatley was Ron’s younger brother by 9 years. He has some very fond memories of his older brother Ronald.

“My favourite memory of him is him flying his rubber band powered model aircraft that he had made, particularly one he called ‘Son of Trike’, in the fields behind our house in Culford Avenue.”

“His favourite time in service was at Beaulieu where he enjoyed flying. I think it was more of a community than Boscombe Down and he also enjoyed taking part in one of the air shows. I remember going to the air show at Beaulieu and Ron showing us around the photo department lab.”

During Ron’s time in service, he travelled in various aircraft as part of his role, even including some early post-war era helicopters. Some of the highlights include:

Ronald Whatley is buried at Eling Cemetery near Totton, Southampton.

Continue Reading
link to Memories of a WAAF at RAF Beaulieu

In 1983, Robert Coles, the local author of the “History of Beaulieu Airfield” book received a letter from a former WAAF who had been stationed at the RAF Beaulieu airfield during the Second World...